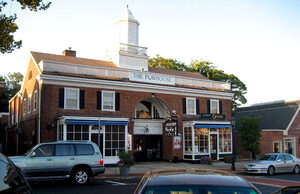 First Selectman Kevin Moynihan announced that the Town has entered into a long-term lease with Cinema Lab LLC of New Jersey whereby the Town and Cinema Lab will renovate the New Canaan Playhouse building (The Playhouse) with a plan to reopen the movie theater in the later Fall of 2023.

Cinema Lab is a movie theatre development and management company focusing on community-vital cinemas. Cinema Lab will add The Playhouse as one of a series of theaters around the country that will offer a technology-forward, ecologically-conscious movie theater showing first run movies that will lead the way in hospitality, programming, presentation and design.  Cinema Lab currently has cinemas in The Village at SOPAC in South Orange and The Bradley at Bradley Beach, New Jersey and The Canon in Canon City, Colorado.

The agreement includes renovating the exterior and interior of The Playhouse in order to meet current ADA regulations and building codes as well as a transformation of the auditorium.  The project design will be dedicated to preserving the historical significance and charm of the original building by leaving the architectural design of the façade and the marquee intact and highlighting the street front windows as an enticing view into a new cinematic experience.  The interior renovations include the addition of a bar that would serve alcoholic beverages, a concession grab and go café, re-imagined auditorium seating with plush chairs and a table to support elevated drinks and local fare.

The Cinema Lab team consists of Luke Parker Bowles; CEO, an award winning film and movie producer and industry veteran, Andy Childs; CFO, former North American CFO of hotel and private club operator Soho House, Brandon Jones; CMO, President of FILMFROG marketing, an outsourced marketing agency and 8 years as head of marketing and director of sales for Studio Movie Grill, the pioneer of in theater dining, Patrick Wilson; Head of Experience, a critically acclaimed actor, director with Tony, Emmy and Gold Globe nominations as well as others. Cinema Lab is an entrepreneurial group that has assembled a group of local investors in support of the project.

First Selectman Moynihan commented: “I am very pleased that we have finalized the lease with Cinema Lab to be able to reopen the Playhouse in late 2023 as a unique, community focused movie venue.  Renovations are already well underway restoring the classic exterior of the 100-year-old building.  And the developing designs for the interior chambers promise to be an exciting re-imagination of spaces that generations of New Canaan families have enjoyed in creating lifelong memories together.  I look forward to welcoming Cinema Lab to become a key part of the community next year.”

Luke Parker Bowles said: “Cinema Lab is delighted to be part of the vibrant town of New Canaan and we look forward to lighting up the marquee and screens on Elm Street. If timing means anything, 2023 also marks the anniversary of The Playhouse, which opened its door four years before the first talkie hit the big screen in 1927.  Movies will once again bring families and friends to the central space where great memories will be created.  Our designers include former members of The Soho House Group; hence the look and feel will have a similar high-end yet cozy and beautifully curated feel, acknowledging and leaning-in to the best elements of the original theater’s atmosphere”.

For further information or questions, contact: Tucker Murphy, 203-594-3002 or  This email address is being protected from spambots. You need JavaScript enabled to view it.