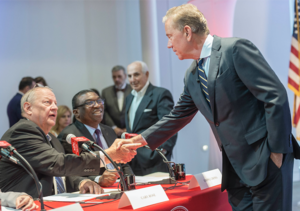 FAIRFIELD, Conn.—A new poll by Sacred Heart University’s Institute for Public Policy, completed in partnership with the Hartford Courant between September 17 and October 2, examined Connecticut residents’ reactions to local quality-of-life issues, rated Governor Ned Lamont’s performance and solicited responses about taxes, immigration, flavored e-cigarettes and the general cost of goods. The results depict an electorate divided by income and party affiliation, with significant concerns over the costs of living in Connecticut and mixed reviews for the governor’s performance to date.

Expressing longer-term concern, more than half of residents surveyed (58.4 percent) reported it is “very difficult” (19.3 percent) or “somewhat difficult” (39.1 percent) to maintain their standard of living. The top-reported reasons for these challenges included “tax increase - state” (61.1 percent); “price increase – general goods” (50.9 percent); and 50 percent said “increase/high taxes overall.” The perception among a majority of residents that Connecticut is a difficult state to maintain their standard of living is not surprising given the recent sales tax increases that went into effect on October 1 for a host of consumer items. The other items most often cited as expense-related factors include electrical/gas/oil (44 percent), health insurance premiums and co-pays (27.2 percent) and low-paying jobs (27.2 percent).

In response to a question regarding immigration issues facing the state, a higher rate of residents surveyed said they did not believe illegal immigration is a serious problem in the State of Connecticut (47.6 percent) when compared to those who do believe it is a serious problem (37.3 percent). However, the majority of respondents (61 percent) thought local law enforcement in Connecticut should assist federal authorities with deportation of illegal immigrants who were convicted of crimes.

“Quality-of-life issues continue to play a central role in residents’ responses to our latest Connecticut poll, with concern over the high cost of taxes, general goods, energy and health insurance,” said Lesley DeNardis, executive director of the Institute for Public Policy and director of Sacred Heart University’s master of public administration (MPA) program.

“The honeymoon for Governor Lamont was short lived, and residents are watching his performance closely. As one might expect, attitudes vary significantly by party affiliation, income and age. Key considerations for residents in gauging the Governor’s performance were kitchen table issues such as the cost of consumer goods and the recent sales tax increases affecting their pocketbooks. Concerns over the availability of jobs, insurance costs and the ongoing impasse over tolls rounded out their list of top issues,” she added.

GreatBlue Research conducted the 34-question Connecticut-specific scientific survey on behalf of the SHU Institute for Public Policy, interviewing 1,000 residents either by phone or electronically. Statistically, this sampling represents a margin for error of +/-3.02 percent at a 95 percent confidence level.

Sacred Heart’s Institute for Public Policy, which was established in 2017 in the College of Arts and Sciences, is aligned with the University’s MPA program. In addition to hosting state-wide polls, the institute conducts public policy research, hosts public forums and workshops and serves as a public-policy learning incubator for students.

A PDF file of complete polling results is available at www.sacredheart.edu/pollresults.