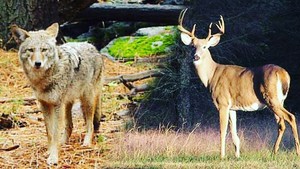 "The hunting and breeding season has these animals on the move. Residents should be alert on the roadways and protect their pets from possible encounters with buck and coyote," New Canaan Police say.

Southwest residents should not let their guard down despite the continued leg-hold trapping and killing of Coyote in their neighborhoods.