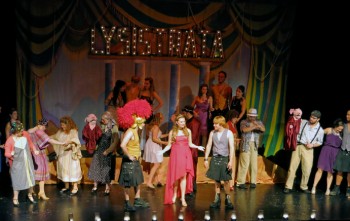 This summer marks a milestone for the Western Connecticut State University Department of Theatre Arts. It's the 10th time faculty and students have traveled to Edinburgh, Scotland, to participate in the renownedEdinburgh Festival Fringe, the largest arts festival in the world.

WCSU Professor of Theatre Arts and the show's director Sal Trapani said, "For our students, performing in Edinburgh is a life-changing experience in many ways. The shows are a chance for students to perform before a live audience and an opportunity for the public to see how talented our students are."

Not just the public sees our students perform, but international theatre reviewers do, too. And the feedback has been fantastic.

A FringeReview post listed Western's production as one of the "Top ten overall recommended musicals."

Veronika Kallus' review posted in Edinburgh Spotlight stated, "Ancient Greece meets the modern world in this classical tale of men and women, of war and peace. Men go to war, and will keep going, women stay at home, longing for their husbands and fearing for their sons. Will they keep putting up with it? Not if Lysistrata gets her way. She comes up with a radical solution: the old women will seize the city's citadel and guard the treasury: no money, no war. And the young women will deny their men what they most want when they return home from war – their gentleness and, ultimately, sex. It takes some convincing, and a lot of stamina to keep up. The question remains – will it be worth it in the end?

"'War – what is it good for? Absolutely nothing' is the shout-it-out line with which this kaleidoscopic musical begins. Cleverly choreographed, rhythmical, colourful and constantly varied, it does its title – The Disco Vaudeville Rock'n'Roll Musical – justice. Cabaret-like style singing, dancing, puppetry, slow motion battle scenes, slapstick, tap-dance, it's all there. The voices are impressively casted, strong and clear, sound in general is very good. Even if all actors are singing, most of the lyrics are still graspable and the message clear. Costume designer Lisa Jordan has done an outstanding job in combining modern dress with a classical appearance.

Colourful, floating robes for the young ladies and kilts replacing loincloths on the warriors – the kilts also work their part for illustrating certain hard conditions as the strike goes on."

Geoff of One4Review posted, "Over the years the Fringe has been graced by this company crossing the pond from America to stage their adaptation of historical pieces and given the twist of making [it] into a musical extravaganza. The classical story of Lysistrata is the chosen storyline this time, the tale of how she persuaded the women of Greece to withhold themselves from husbands and lovers in order to force peace negotiations, a ploy that obviously worked. The cast of 20-plus were excellent without exception and as usual there were some amazing singing voices, the set was simple but excellently dressed, and the original music by Sal Trapani enjoyable and fitting to the styles in this title. Trapani is also the writer, director and producer of the piece and his creativity is certainly done justice by this extremely talented young cast. They can sing and dance, tap, and the routines are well drilled. You can also expect some stage fighting and puppets to add to the productions value. And there are plenty of comedy moments as well."

A review posted by The New Current proclaimed, "I will admit I wasn't sure what a disco vaudeville Rock 'n Roll musical would be like and whether or not it would work, but after the opening number, 'War' by Edwin Starr, I became intrigued. As the singer launches into 'War,' the rest of the cast, a mixture of Greek women dressed in a series of revealing satin dresses and Soldiers, march through the central isle of the Debating Hall. ... The performers are a credit to the production and one couldn't fault them. Each of them sang with great control and range that lifted the production. The story itself is strong and interesting but also funny – the scenes with the three pig magistrates are done well. A special note should be given to Lisa Renne Jordan's costumes, which are both delicately sexual and wonderfully detailed, adding greatly to the production."

The WCSU Department of Theatre Arts will stage the original play, "Two Nights Near Doolin," in October and the musical "Chicago" in October and November on campus. For more information about upcoming performances, visit http://www.wcsu.edu/svpa/events.asp.