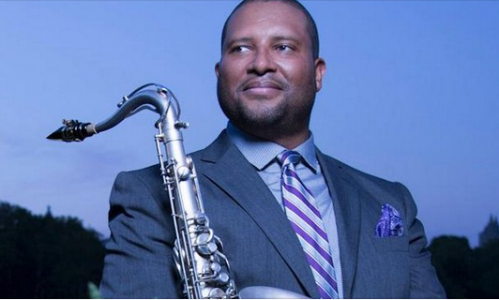 Saxophonist Jimmy Greene and his quartet will headline an evening of “Summer Breeze Jazz” on Friday, Aug. 28, at Ives Concert Park on the Western Connecticut State University Westside campus, 43 Lake Ave. Extension in Danbury. The event, part of the Newtown Savings Bank Fine Arts and Family Series, will begin at 7 p.m. with performances by trumpeter Dominick Farinacci and vocalist Gregory Generet. Tickets are $25 for the public and $10 for students, plus fees, and are available at https://www.eventbrite.com/e/summer-breeze-jazz-featuring-the-jimmy-greene-quartet-tickets-17938411271.

The Jimmy Greene Quartet performs regularly in jazz venues, festivals and clubs worldwide, including venues in New York, Moscow, Rome, Paris, Israel, Uruguay and Brazil. In addition to his recordings and appearances as a leader, Greene appears on 75 albums as a sideman, and has toured and/or recorded with Horace Silver, Tom Harrell, Freddie Hubbard, Harry Connick Jr., Avishai Cohen, Kenny Barron, Lewis Nash, Steve Turre, the New Jazz Composers Octet and the Carnegie Hall Jazz Band, among many others. He is an assistant professor of music and coordinator of Jazz Studies at WCSU.

Greene’s debut recording for Mack Avenue, “Beautiful Life,” is a celebration of the life of his 6-year-old daughter, Ana Márquez-Greene, whose life was tragically taken on Dec. 14, 2012, at Sandy Hook Elementary School. He fulfills that mandate with an intense, cohesive, genre-spanning program, juxtaposing the hardcore instrumental jazz for which he is best known with traditional spirituals, contemporary Christian music, standard ballads and three original songs framing his own lyrics.

Farinacci has recently been named Global Ambassador to Jazz at Lincoln Center by Wynton Marsalis, working to further integrate jazz into communities around the world. Since launching his career in Japan with a prolific run of eight albums, he has released two more globally, toured with his band around the world, and received the International New Star Award.

A career in television as a post-production editor came first for Generet, before he found himself pursuing his love for music. Taking on the theme of romance, Generet has re-imagined the standard, adding his own unique styling and vocal flexibility. Gregory went on to perform sold out performances and in 2014 he began working with Jazz at Lincoln Center Doha (Qatar) where he has been performing as a special guest with the Dominick Farinacci Quintet.