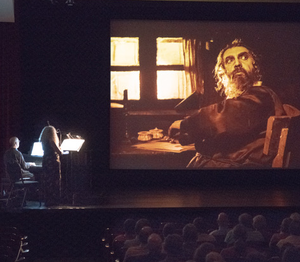 Join the JCC in Sherman on Saturday, June 1st at 7:00pm for The Ancient Law, a superb comedy/drama from a great German Jewish director of the Weimar era. In this two-hour silent feature, based on a true story, a rabbi’s son leaves the shtetl to become an actor in Vienna. A forerunner of The Jazz Singer, which was released four years later, this production spares nothing—gorgeous costumes and sets, and Berlin's finest actors.

World-renowned musicians Alicia Svigals and Donald Sosin will play their collaborative score that has brought audiences to their feet at Lincoln Center, the San Francisco Silent Film Festival, and two dozen other venues in the US and Europe. Svigals co-founded the Klezmatics and has worked with Itzhak Perlman and the Kronos Quartet. Sosin has performed for silent films all over the world, from MoMA and BAM to venues in Bologna, Moscow, Shanghai and Bangkok. Don’t miss this stunning event!

This performance made possible by the Sunrise Foundation for Education and the Arts.

Violinist/composer Alicia Svigals is the world's leading klezmer fiddler and a founder of the Grammy-winning Klezmatics.  She has worked with violinist Itzhak Perlman, the Kronos Quartet, playwrights Tony Kushner and Eve Ensler, poet Allen Ginsburg, Robert Plant and Jimmy Page of Led Zeppelin, Debbie Friedman and Chava Albershteyn.  Svigals was awarded a Foundation for Jewish Culture commission for her original score to the 1918 film The Yellow Ticket, and is a MacDowell fellow. With jazz pianist Uli Geissendoerfer, she recently released Beregovski Suite, a recording of contemporary interpretations of klezmer music from a long-lost Soviet Jewish archive.

Pianist/composer Donald Sosin grew up in Rye, NY and Munich, Germany. Since 1971 has performed his silent film music at Lincoln Center, MoMA, BAM, the National Gallery, Yale, Harvard, and major film festivals here and abroad. He records for Criterion, Kino, Milestone and TCM. He has played his scores for Jewish-themed silent films at the New York, Cleveland, Atlanta, Toronto, San Diego and Washington Jewish Film Festivals. His one-act opera for families, Esther, was performed at the National Yiddish Book Center in Amherst, Mass. Other Jewish music includes a children’s opera, A Parakeet Named Dreidel, Yiddish folk song arrangements, and Three Psalms, premiered in 2009 by the Jerusalem Symphony Orchestra. He and his family live in Lakeville, Connecticut. Donald is currently touring with Alicia Svigals, performing her score for The Yellow Ticket and their collaborative score for Das Alte Gesetz

Tickets are $20 for members $25 for non-members. Pre-paid registration required by Thursday, May 30. Doors for this event will open at 6:45PM and will start promptly at 7PM. Please reserve online at www.jccinsherman.org or call/email us at 860.355.8050 or This email address is being protected from spambots. You need JavaScript enabled to view it. .

The JCC in Sherman has been a gathering place for the local communities in the Candlewood Lake area and nearby New York towns since 1994. The mission of the JCCS is to provide high quality educational, cultural, and social programs to Sherman, CT and the surrounding communities serving all people irrespective of age, race, or religion.