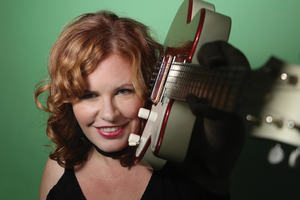 Advance Tickets can be purchased at the NF Sr. Center (203-312-5665) or by mail. Payments made by mail should be payable to Groovin’ in New Fairfield, and sent to GINF c/o New Fairfield Sr. Center 33 Rt.37 New Fairfield, CT 06812 Please allow sufficient time when mailing. All Sales Are Final.

For additional information contact us at:  This email address is being protected from spambots. You need JavaScript enabled to view it.  or www.groovininnewfairfield.com

SUZIE VINNICK A Saskatoon native transplanted to the Niagara Region of Ontario, Suzie Vinnick is the proud owner of a gorgeous voice, prodigious guitar and bass chops, and an engagingly candid performance style. Her career has seen triumph after triumph. Among her most recent successes: being nominated for a 2018 Canadian Folk Music Award for Producer of the Year with her co-producer, Mark Lalama. Suzie achieved finalist status in the Solo/Duo Category at the 2013 International Blues Challenge in Memphis, TN; received the 2012 CBC Saturday Night Blues Great Canadian Blues Award and the 2012 Sirius XM Canada Blues Artist of the Year. Suzie has won 10 Maple Blues Awards (she has been nominated for 22 so far!), won the 2011 Canadian Folk Music Award for Contemporary Vocalist of the Yearand is a 3X Juno Nominee. Suzie has just released her latest album, a full-band roots and blues extravaganza entitled Shake The Love Around. www.suzievinnick.com
STEVE KIRKMAN www.stevekirkman.com
About Groovin’ in New Fairfield: Groovin’ in New Fairfield seeks to develop and promote ongoing, regularly scheduled live music programs in New Fairfield and surrounding areas. It is a non-profit organization supported by sponsors, local businesses, grants from charitable organizations and patron donations and is staffed by volunteers. It operates under the New Fairfield Parks and Recreation Commission. www.groovininnewfairfield.com