Details
Published on Tuesday, 21 September 2021 17:24
Written by The Ridgefield Playhouse 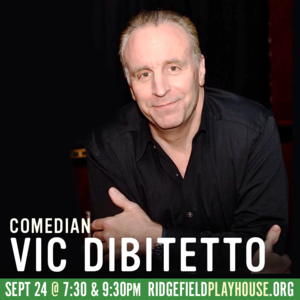 Known for his hilarious viral rants – the “Italian Hurricane” Vic Dibitetto returns to The Ridgefield Playhouse after 5 past sold out shows! Get your tickets now to see Vic Dibitetto with two shows this Friday, September 24 at 7:30pm and 9:30pm, part of the Barts Tree Service Comedy Series.

Vic has created many viral video characters - including Tony Gaga, That Guy, Frankie Pentangelli, Fool by the Pool and Ticked Off Vic. His Yankee and Giant locker room satires are now legendary. And his Bread and Milk video is like a Christmas Carole that comes back on TV, radio and news outlets every time it snows almost anywhere in the world. Vic has been called a cross between Rodney Dangerfield and Ralph Kramden.

He thrills his audiences with his fast-paced, frenetic, no-holds-barred style of comedy. Dibitetto is a 35-year comedy veteran who became a breakout sensation on YouTube in 2013 with his viral video “Bread and Milk,” which garnered over 19 million views, and by playing a character in Paul Blart: Mall Cop 2 based off his own videos. His newfound celebrity status and brilliantly funny video rants (“Ticked Off Vic”) have propelled his career to new levels and brought laughter to millions of followers nationwide. Make it a great night out with dinner and a show – visit Bareburger Ridgefield (38 Danbury Road, Ridgefield) for dinner enjoy a complimentary glass of house wine or draft beer with your entrée when you show your ticket! Media sponsor for this show is 99.1 WPLR.

Vic Dibitetto often refers to himself as “The Donkey of Comedy,” or “The Working Class Zero.” He’s proud to be “a regular blue-collar guy.” For most of his career, he was driving a school bus or a garbage truck as a day job. At the start of the pandemic, his “A Message to the Government” about inadequate stimulus checks, was viewed 33 million times on Facebook, and 4 million times on YouTube. “I’m just saying how I feel and what’s going on right now in this country with the working people.” His comedy follows similar powerful themes, as he churns energy, honesty, and humanity into nonstop laughter.

For tickets and info visit www.ridgefieldplayhouse.org