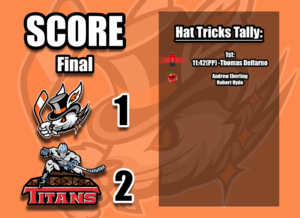 The Jr. Danbury Hat Tricks played five games this past week between the NAHL and NA3HL editions of the team.

The NAHL Jr. Hat Tricks next play on October 4th in a road matchup at the Northeast Generals in Attleboro. Puck drop is scheduled for 1:30 PM. The next home game is October 7th and 8th when the Maryland Black Bears play a two-game series at the Danbury Ice Arena.

The NA3HL Jr. Hat Tricks earned their first victory of the season on Wednesday afternoon against the New Jersey Titans in Middletown, NJ, winning 2-1 on a pair of third period goals by Oleg Egorov and Denis Radchenko while Ryan Maguire stopped 28 of 29 shots.

They then traveled to Attleboro, MA, to face the Northeast Generals and dropped a physical matchup 1-0. Ryan Maguire again shined in net, but the offense could not score on the General's defense.

The weekend concluded on Sunday night with a 4-3 defeat to the Titans. New Jersey got up to a 3-0 lead in the first and the Hat Tricks chipped away and answered back. Lou Caulfield, Oleg Egorov, and Brody Trew scored goals to give the Hat Tricks a fighting chance while Gennaro DeMaio stopped 29 of 33 shots on net in his first game since December of 2021.

The NA3HL Jr. Hat Tricks play on Wednesday against the New Jersey Titans on the road. Puck drop is scheduled for 12:30 PM at the Middletown Ice World Arena. The next home game is scheduled for October 23rd, when the Norwich Sea Captains visit the Danbury Ice Arena.

All NAHL and NA3HL games are carried on Hockey TV.