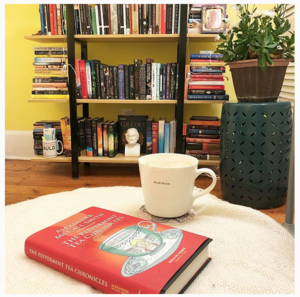 September was weird. It seemed to pass in slow motion, but at the same time, I’m confused that it’s October already and don’t know to where this year has disappeared.

As far as my reading, it was all over the place. I read across a range of genres. My current trend favoring behemoth fantasy novels fell to the wayside: I participated in the Contemporaryathon readathon, which resulted in almost half my reads this month being novels that are set in our very own time. The last time I read any contemporary fiction was March, and that was one novel! Incidentally, I do not foresee this repeating since the vast majority of books on my TBR are historical and fantasy fiction.

Most notably in my reading life this month: Two novels I read will be on my 2019 favorites list. Can you guess which two from the descriptions? #cheeky

In Cuba I Was a German Shepherd by Ana Menéndez

This is a collection of linked short-stories revolving around Cuban-Americans, primarily first and second generation. The stories range from fantastical and allegorical to realistic fiction and are connected thematically and through reappearing characters. Menéndez exploration of immigration as loss of identity resonated with me in particular as a second generation American (though my family is Greek not Cuban).

Reading another 44 Scotland Street novel is like coming home. If you’re not familiar with the series, it follows the lives and loves of a group of Edinburgh residents. That is all. It’s slow-paced, character-driven stuff. And what characters! I’m so pleased with the direction this one took. I’ve written more about my feelings on this series here, if you’re interested in learning more about this charming series.

According to goodreads, I have read this particular book in the Harry Potter series every year for the past four years. This came as a surprise, but it shouldn’t have. It features time travel, one of my favorite literature tropes. I wrote about the book way back in 2014 here.

The Ten-Thousand Doors of January by Alix E. Harrow

I’ve categorized this as adult fantasy above, but it has also been put into the YA fantasy category. So take your pick, I suppose.

It is a historical fiction, portal fantasy set at the turn of the 20th century. The main character is January, named for Janus, the Roman god of boundaries and passages (hint, hint). She lives a cosseted existence with her guardian while her father travels the world acquiring treasures for him. As long as she plays her proper role, everything will be fine. But of course, she does not play her proper role. Instead, she discovers a portal to another world, and danger, forbidden knowledge, and adventure ensue.

The pacing of the story could perhaps have been tweaked, but overall, I loved this novel. It challenges the easy labeling and categorizing of British imperialism, a legacy humanity continues to be weighed down by, and honors liminality. It also has a strong Odyssey vibe in the tug between curiosity and the desire for a stable home, with an admirable modern twist. This was not sold to me as having any connection to Greek mythology, but it’s the book that most seems to get the spirit of it—the exuberant chaos, competing desires, and subversiveness. It is the most satisfying “retelling” of the Odyssey I’ve yet read.

The Lady Rogue by Jenn Bennett

Here we have another historical fiction fantasy, this one set largely in Romania in the 1930s. Funny enough, it also features a protagonist whose father is a treasure-hunter. This time, it’s Theodora, named for the Byzantine empress (Jenn Bennett, I salute you), who is waiting for her father in Istanbul with a cranky French minder. The minder takes off with most of Theodora’s cash, leaving her stranded…until Huck Gallagher, a fellow with whom Theo has A Past, shows up. They go in search of her father, and danger, adventure, and romance commence, in equal measure.

This was an enjoyable adventure-romance. Bennett writes funny, which I love, and the history and fantasy elements worked cleverly together. Between this and The Ten Thousand Doors of January, I may have discovered a new favorite sub-genre this month: historical fiction fantasy.

Paul Stuart is a food writer who, in this first book, travels to Italy to research and write his latest book. It’s Alexander McCall Smith, so it features community, conversation, and a few hijinks along the way.

This has been a polarizing book, apparently. After reading it, I can say that Zadie Smith continues to be one of my favorite authors. I love the way her mind works and the way she explores social problems with both compassion and critique for all sides. In her books, there are no angels and demons but flawed humans, sometimes trying their best, other times not. Her books feel like life: complicated and messy, heartbreaking and heartwarming, tragic on the global scale but hopeful on the personal and communal scales.

The story is told in the first person by an unnamed narrator. One part of her narrative focuses on her childhood friendship with Tracey, who the narrator meets in a dance class, and the second part on her job as the personal assistant to a pop star called Aimee. The significance of the two narratives is revealed gradually but powerfully, especially in the final chapter.

Much of the negative criticism that I’ve read of the novel revolves around the claim that Smith is trying to do too much and that the two narratives don’t work together. I disagree. Smith explores and questions what being helpful looks like. The two narratives provide juxtaposing views that are essential to the bigger picture, enabling her to examine intentions and unintended consequences with her characteristic unflinching honesty.

The Tyrant’s Tomb (Trials of Apollo #4) by Rick Riordan

This fourth installment is set at Camp Jupiter, where the demigod children of Roman deities prepare for and engage in battle. That’s not really a spoiler because that’s what demigods do in Rick Riordan books: They fight monsters. As predicted, I read this in about 36 hours, though it was not the strongest of Riordan's whopping 14 books in the Percy Jackson universe. My two primary criticisms are that the tone is weird at the beginning (no details because that would be a book three spoiler) and there is not enough plot. I still enjoyed it, of course. The baddies in this series are Roman emperors, so of course I enjoyed it. *winks cheekily*

Daisy Jones and the Six by Taylor Jenkins Reid

There were two big reasons for me not to enjoy this book. Let’s review: 1) I don’t like books about famous people, real or imagined. 2) Both books I’ve read by this author previously have fallen flat with me. But in a plot twist worthy of Reid (I acknowledge her plot excellence, even when I haven’t enjoyed her execution), I enjoyed this book tremendously. Partly, this is because I listened to the audiobook, which was perfect for the novel’s format. The story presents as an interview with a singer called Daisy Jones and the members of a band she sang with called The Six. The audiobook featured multiple narrators. Audio narrators inevitably interpret the words on the page, and there was not a single voice that felt flat or off.

I won’t speculate about how I would have experienced this with my eyes since it’s impossible to say with certainty. But I can say that the plot built tension and surprised me in a satisfying way. I listened to it in two sittings, which tells you how compelling I found it.

I enjoyed Lockhart's We Were Liars. But friends, this novel appalled me. It’s marketed as YA thriller/mystery, and I was certainly mystified. Mostly about how this book presumably was passed from one editor to another without anyone noticing disappearing plot points and, more significantly, a disturbingly corrosive message. For the record, a psychopath murdering everyone who makes her sad/hurts her is neither “girl power” nor feminism. Apparently, this needs saying because it’s not clear to everyone. If you have read this book, have I missed or misunderstood something? Please tell me I’ve missed or misunderstood something.

Ajax dramatizes a Trojan War myth about the eponymous Achaean (aka Greek, if you prefer the more familiar but anachronistic term) hero. The larger myth, with which the play is in conversation, takes place after Achilles’ death. In the myth, the Achaeans hold funeral games, as is custom, to honor their fallen comrade. The winner will receive Achilles’ battle gear. Athena contrives for Odysseus to beat Ajax, though the latter is the better competitor. Ajax becomes so enraged that he goes on a murderous rampage. His intended targets are the Achaeans who he believes have cheated him of his rightful prize, but Athena comes to their aid. She causes Ajax to go mad, and he murders livestock, thinking they are the Achaean warriors. After his madness passes, Ajax is so distraught that he takes his own life.

And that brings us to Sophocles’ play. It dramatizes the aftermath of Ajax’s madness—his suicide and the debate over whether he deserves an honorable burial given his murderous intentions against his fellow Achaeans. I’ve never found Sophocles quite as affecting as Euripides, but those final scenes, when first Ajax’s brother and Agamemnon then Odysseus and Agamemnon, face off about what constitutes justice make this play fascinating and thought-provoking. This and Antigone are my two favorite Sophocles tragedies.

So...have you guessed which two novels (that is already a hint) will be on my 2019 favorites list?