Take a trip back in time with The Sixties Show at The Ridgefield Playhouse on February 1st!

Details
Published on Monday, 20 January 2020 10:47
Written by The Ridgefield Playhouse 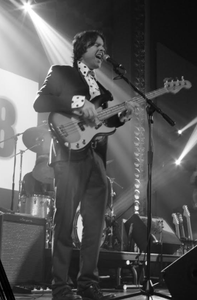 Take a trip back to another time and place where an AM radio blasts the latest hits from a convertible, on a warm summer starlit Saturday night on any street USA. You can revisit, or encounter for the first time, these heady days, from the stripped down pulsating 2 guitars, bass, drum and vocal harmony-laden British invasion pop explosions, right up to the pivotal transition of late 60’s orchestrated blasts of harmonious rapture when The Sixties Show returns to The Ridgefield Playhouse on Saturday, February 1st at 8:30pm, part of Pepsi Rock Series powered by Xfinity, with support from Nutmeg Livery.

With Musical Direction by Ridgefield, CT resident Craig O’Keefe, the band is widely celebrated and known for spot on, note for note re-creations of the hits, B-sides and deep album cuts from the greatest songs of the 1960’s.

Visit Eddie’s Pizza & Pasta (24 Prospect Street, Ridgefield) the night of the show and enjoy a complimentary glass of house wine with your entree when tickets are presented! Media partner for this event is i95 The Home of Rock ‘n Roll.

The Sixties Show will transport you back to the most influential decade of our time by meticulously recreating and celebrating the sights and sounds of the 1960s. Featuring former members of The Who’s touring band, Bob Dylan’s band, and the“Saturday Night Live” band, The Sixties Show is the Greatest 1960’s Musical Re-Creation Show in the World.

All of the music is performed live, with no samples, backing tracks or prerecorded music of any kind. The band uses a state of the art sound system but only plays authentic 1960’s period vintage and reissue vintage gear and instrumentation just like the original artist’s and original recordings. With genuine 1960’s mod costumes, the show is powerfully dramatized by a combination of narration and 60’s archival audio and newsreel footage that reminds the audience how uniquely inspirational, entertaining, and historically significant the music of the 1960’s was and continues to be.

The Sixties Show was created by Ridgefield resident, Craig O’Keefe, who honed his musical prowess on the LA scene - writing, touring and recording with several bands, most notably Hal Lovejoy Circus {BMG Ent} who scored a Top 10 Hit on the Billboard Alternative Album Charts. He was also a founding member of 1990s Hollywood, CA kingpins, Annapurna {Warner Bros Records} who shared stages with everyone from Smashing Pumpkins and Stone Temple Pilots to Oasis, Sublime and Weezer.

The members of The Sixties Show were hand-picked to perform and record with with Sir Paul McCartney, The Beach Boys, Brian Wilson, The Bee Gees, Mick Jagger, Bruce Springsteen and other legends and individually have performed at the most renowned venues in the world such a Madison Square Garden, The Hollywood Bowl, Wembley Stadium, The Grand Rex in Paris, The Budokan in Tokyo, and others.

For tickets ($37) call or visit the box office, 203-438-5795 or go online at ridgefieldplayhouse.org.  The Ridgefield Playhouse is a non-profit performing arts center located at 80 East Ridge, parallel to Main Street, Ridgefield, CT.