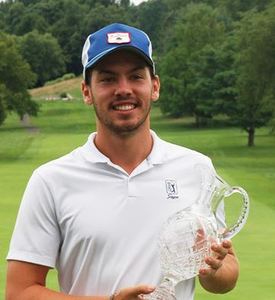 Max Brings it Home at the Open

Max Theodorakis won it coming home and going away.

At his home course, Ridgewood Country Club, Theodorakis enlarged upon yesterday’s two-shot lead while the rest of the field, with one exception, moved the other way. He shot 34-32-66 in the interrupted final round of the 86th Connecticut Open presented by Reby Advisors, matching the best score of the championship, and shooting three-under 32 on the final nine holes today. In front of an enthusiastic Ridgewood crowd he never faltered, finishing with birdie at 18, though by then the Open was shut.

The experienced field behind him, including four-time champion Kyle Gallo, three-time champion Frank Bensel and Defending New England Open Champion Jason Thresher could not match Theodorakis’ confidence, or at least his course knowledge.

“I had a target score in mind, six under, and I concentrated on that,” said the 22-year-old who starred at Campbell University before playing his first Connecticut Open as a professional this week. “I figured if I shot six under, I would have it. I ended up with seven under, which is pretty good.” In the combined (Wednesday and Thursday) final round, Theodorakis made seven birdies, three on the front, four on the back, with two bogeys.

Theodorakis had been part of a 3-way Open playoff in 2017, was Low Amateur in 2018, and finished T8 last year. “To do it here, on my home course and have it be my first pro win, well, it all kind of fell into place,” said the champion.

Theodorakis said his knowledge of Ridgewood’s greens probably made the difference. “I know these greens well and I know them at a lot of different speeds,” said Theodorakis, who had his father Alex on the bag. “[With the weather] the greens changed from round to round. They were faster today. The course was soft, and that probably was not something some of field was used to.”

Silvermine’s Pete Ballo, who shot 69, mounted a late charge, but failed to catch Theodorakis. The closest they came was when Theodorakis, then five under, bogeyed the par-4 14th and Ballo, then one-under, hit 5-iron on the 223-yard par-3 17th to 12 feet. His putt narrowly missed and what might have been a two-shot swing didn’t materialize. Theodorakis birdied the next hole, the par-5 15th, and the engraving began. Check that. It began a hole later when, after hitting an errant tee shot among trees to the left of the long par-4 16th, Theodorakis shaped a 4-iron to six feet.

“When I made that shot, I thought, okay,” he said after. “That kind freed me up on the final couple of holes.” Ballo likewise pointed to the 16th, where he got up and down for par. “That was huge,” said Ballo, and would have been even more important had the putt at 17 fallen.

Ballo tried for eagle at 18, but his 269-yard second failed to find the par-5 green. He made a nifty up-and-in over a bunker from the right rough, but the miss at 17 stayed with him.“I knew I needed that,” he said. His birdie at 18 separated him from third-place finisher Blake Morris, of the Country Club of Waterbury, who for the fourth consecutive year finished in the top 5. Gallo was fourth at even par, shooting three straight 71s. Last year’s runner-up Paul Pastore of Fairview Country Club in Greenwich and former PGA and Champions Tour player Bobby Gage were tied for fifth at one over.

Amateur Saptak Talwar, who led the championship after 18 and 36 holes at -4, shot 77 to finish at plus-2 (T8) with recently reinstated amateur, Patrick Casey of Torrington, who shot 72 today with a birdie at the final hole to tie Talwar for Low Amateur honors.

In the end, only three players broke par. “The course won, pro,” said one of the members to host professional Justin Foster, one of the state’s top teachers and a competitor this week. For the club’s 100-year celebration, muffled by a pandemic and shaken by a hurricane, having a member win the championship and the course play as sturdily as it did, were reason to celebrate, said members.

Runner-up Ballo found reason for satisfaction as well. “With the waiting, and the storms and everything that’s been going on, I’m happy to have played as well as I did,” said Ballo, whose father Mike, who won this championship twice, was on hand to watch. “I’ve been very busy with lessons and arranging member events [at Silvermine] and it’s been great, golf has really been something people are into during this time. So that’s a good thing. But normally I’ve played two Opens by now. So for me to do this well at the first, I have to be happy.”

Theodorakis is the second member to win the Open at Ridgewood. Ken Green, who won two Connecticut Opens as PGA Tour tournaments, did it in 1992. (At the media day in July, Green predicted that Theodorakis would take the title this year.) The last time an Open champion won on his home course was Jay Rice at Wee Burn in 1999. Brendan Walsh did it in 1996 at the Patterson Club. Mike Gilmore, who was in the field this year, accomplished the same feat at Stanwich in 1993. It has been done five times in the history of the championship.

Theodorakis made his move today on a course that had been, in his words, “obliterated” by Tropical Storm Isaias on Tuesday. “I’d like to thank [superintendent] Dave Kerr and his staff for the job they did to get the course back in shape.”

Those sentiments were echoed by CSGA Executive Director Mike Moraghan, who thanked Kerr, the club and its members for their hospitality and enthusiastic support, including the decision to allow the championship to finish a day late on Thursday morning. He had special thanks for Bob Reby of Reby Advisors, whose company’s support of the Open this year made possible a purse increase of 20 per cent—to $60,000, with the winner receiving $14,000.

“Golf is an individual sport, but this week was all about teamwork,” said Moraghan. “From our staff and volunteers, to the pro shop and clubhouse staff at Ridgewood, to the team at Reby Advisors, and most especially Dave Kerr’s team rescuing the golf course from a devastating storm, it was a collective effort to stage a great championship at a great golf course. And that Theodorakis team sure was impressive with dad Alex on the bag and son Max playing fantastic golf. A great way for everyone to celebrate Ridgewood’s 100th anniversary.”