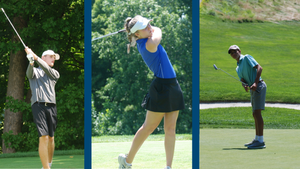 On a glorious day at Silver Spring Country Club, the 52nd Borck Junior got underway. The first day of the event featured stroke-play qualifying with the competitors in the Boys Division and the Girls Division battling to advance to Tuesday’s match play.
In the Boys Division Alex Elia and Dean Diguglielmo, both playing on their home course, fired 4-over 75s to share medalist honors.

Elia played in the first group of the day and set the pace as he sped around the golf course. “My ball-striking was really good,” Elia said. “I felt like I hit the ball the best I have had in a while and just kind of plotted my way around. It is a tough course, the greens are really firm and fast.”

With the advantage of playing before the wind picked up, Elia played a steady round rolling in two birdies against six bogeys. His signature birdie came on the 140 yards par-3 15th when he hit a pitching wedge to 15-feet.

“I think it is a big advantage to play on my home course,” said Elia the top-seed in the bracket as a result of finishing his round first. “Especially with the wind and greens like this and especially if I can adjust quickly like I did today I think I can have a pretty good shot.”

Diguglielmo got his round off to a blazing start with birdies on each of his first two holes, converting from 10-feet and then 15-feet. “I felt like I putted really well today. I was confident on the first couple of greens,” Diguglielmo the two-seed said. “I was able to make early birdies which made it more comfortable for me to play.”

Playing in his first Borck Junior, Diguglielmo will now get a chance to compete in match play for the first time in his career, “I am looking forward to trying out my first real match play event. It will be fun.”

Results I Photo Gallery
Charlie Stuhr (Redding CC) earned the three-seed with a 5-over 76. Stuhr was able to overcome three double-bogeys throughout his round to post the third lowest score of the day.

“I think I got through Nos. 5, 6, and 7 after they didn’t go well and I just kind of got my head in it and started putting the ball better,” said Stuhr who made match play two years ago. “I just figured out the speed of the greens and that really helped.”

A 3-for-2 playoff, with Drew Fitting (GC of Avon) and Charlie Dolan (Glastonbury Hills CC) advancing, determined the final two spots in match play. Scheduled to begin tomorrow morning, match play will start with the Round of 16 followed by the quarterfinals in the afternoon. The Borck Junior will conclude on Wednesday with the semifinals and championship match.

In the Girls Division Mia Holbrook, also playing on her home course, earned a two-stroke victory to capture medalist honors. Holbrook carded a 6-over 79 to finish in front of runner-up Jordan Levitt (Rockrimmon CC).

“I definitely started out getting used to the greens, even though it is my home course they are running super fast today so getting the feel of the greens was definitely an adjustment,” Holbrook said. “But I think off the tee today was really good and my approach shots were mostly pretty good. Where I lost the most strokes was probably putting but everything else was pretty solid.”

Holbrook’s best side was the back nine where she shot a 2-over 38 and converted her lone birdie of the day. Playing the par-5 13th she came up just short of the green with her second shot and putted her third to three feet resulting in an easy birdie.

“I think playing on my home course is definitely an advantage because you know, for instance, there are some blind tee shots that I know exactly where I am going to aim. And I do know the greens better and the rough better,” Holbrook said of playing her home course. “But I still need to go out and hit the good shots and hit them where I need to hit them.”

The top-five in the Girls Division was rounded out by Lydia Welborn (Golf Performance Center), Ava Gross (New Haven CC), and Kenna Roman (Shuttle Meadow CC) in a tie for third place at 9-over.

Match play in the Girls Division will begin Tuesday afternoon with the quarterfinals followed by the semifinals and championship match on Wednesday.