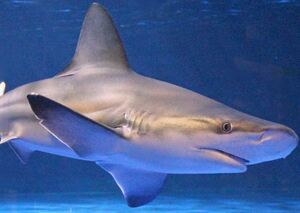 Cast your vote this weekend to decide the name of a new sandbar shark exhibit in The Maritime Aquarium at Norwalk.

Three finalists have been chosen from names submitted as part of the Aquarium’s recent Giving Tuesday fundraising campaign: “Life of Sharks,” “Sandbar Ridge” and “Shark Haven.”

Everyone now has a say in which name should be the winner, through an online public vote Dec. 4 and 5. Find the ballot both days through a link on the Aquarium’s website – www.mariitmeaquarium.org – and on its social-media pages.

The special exhibit, which opened Nov. 26, offers guests a behind-the-scenes look at the complex care needed by four new sandbar sharks. Submitted names were weighed on creativity and alignment with the exhibit’s theme of animal care and welfare.

The sandbar sharks serve as examples of how animals new to the Aquarium are quarantined before being introduced into the permanent displays. In the exhibit, the sharks’ growth will be charted, and they’ll be screened for health issues and taught to feed in a safe, controlled way.

Displays offer information about sandbar sharks and their care; explain the careful process of receiving the sharks from a vetted facility in Florida, where the sharks were born and raised; and trace out the complex life-support systems needed to create the optimal aquatic habitat.

The winning name will be announced on Mon., Dec. 6. In addition to seeing the name welcoming guests over the door of the exhibit, the winner will receive a behind-the-scenes tour of the Aquarium, including the chance to watch the feeding of the large sand tiger sharks from above their exhibit. The runners-up will receive four admission tickets and a plush shark toy.

Learn more about the new exhibit – and cast your vote – at www.maritimeaquarium.org.