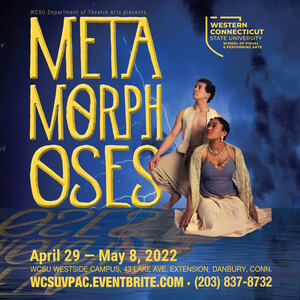 Written by American playwright and director Mary Zimmerman, this play opened in Broadway’s Circle on the Square Theatre in 2002 and was nominated for a Tony Award for Best Play and received the 2002 Drama Desk Award for Outstanding Play, among several other awards. “Metamorphoses” is based on Ovid’s transformation myths, focusing on the concept of change. A series of vignettes, the play subtly mixes the ancient stories of pathos and tragedy with contemporary language, humor and thought. The WCSU production is directed by Professor of Theater Arts Sal Trapani, a theater writer and composer who is also trained in mime, modern dance and stage combat.

“This production of ‘Metamorphoses’ juxtaposes the ancient and the modern, using original music, dance, song and spoken word to create a ravishing theatricalization of Roman poet Ovid’s powerful masterwork,” said Trapani, adding that, “A brilliant company of student performers embody figures from Greek mythology to share both well-known and rarely told stories of transformation and change in this visually stunning and moving production.”

The WCSU main cast of “Metamorphoses,” who each play various roles, includes: