Details
Published on Wednesday, 18 May 2022 16:58
Written by The Ridgefield Playhouse 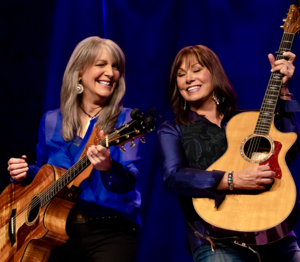 Don’t Miss Out! Country Stars Kathy Mattea and Suzy Bogguss are “Together At Last” on May 19th

It’s almost here! A very special debut performance by Grammy-award-winning Country Stars, Kathy Mattea and Suzy Bogguss, is coming to The Ridgefield Playhouse on Thursday, May 19, 2022 at 8:00pm.

Known best for their endearing country songs such as “Eighteen Wheels and a Dozen Roses,” “Where’ve You Been?,” “Outbound Plane,” “Someday Soon,” “Letting Go,” “Drive South,” and “Hey Cinderella” the two folk legends have finally joined forces to share their celebrated music and personal chemistry on theater stages across the country in their “Together At Last” tour.

Other than guesting on one another’s recordings, there have only been a handful of times these two superstars have been able to perform together on stage. Don’t miss this amazing opportunity to be a part of this very special performance! This show is part of the Mountain Dew Country & Bluegrass Series, 068 Magazine Singer Songwriter Series, and is sponsored by Texas Roadhouse.

Swing by The Ancient Mariner on 451 Main Street in Ridgefield, CT for dinner the night of the show and receive a complimentary glass of house wine or draft beer with the purchase of an entrée with your ticket.

Kathy Mattea has enjoyed much success and acclaim during her 35-year career in Country including two Grammy wins, four CMA Awards, four #1 country singles, and five gold albums (plus a platinum Greatest Hits collection). In addition to her country hits, Kathy is increasingly involved with public broadcasting, consulting, and contributing on screen in Ken Burns’ 2019 documentary for PBS Country Music, and recently replaced founder Larry Groce as the host of the long-running NPR show Mountain Stage.

During the creative explosion that was country music in the 1990s, Suzy Bogguss sold four million records with her sparkling radio hits. Not shy to the camera, she frequently appears on public radio’s A Prairie Home Companion and hosts a weekly livestream, Wine Down Wednesday, that is currently closing in on one hundred episodes.

Appropriately titled “Together At Last,” the tour features both artists on stage for the entire performance, swapping songs and stories, singing harmony, and playing guitar on each other’s biggest hits. Never content to rest on their past achievements, the pair brings new material to these shows, along with two careers worth of humorous and heart-warming stories. Be sure to get your tickets now before they sell out for this once in a lifetime experience!

For more information or to purchase touchless print at home tickets ($59) go online at www.ridgefieldplayhouse.org or visit or call the box office at (203) 438-5795. The Ridgefield Playhouse is a non-profit performing arts center located at 80 East Ridge Road, parallel to Main Street, Ridgefield, CT and is committed to keeping the arts alive and available to all.