Lamont Appoints Mark Kohler as Secretary of the State 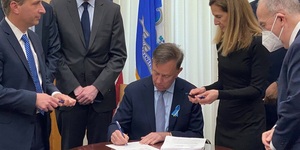 Governor Ned Lamont today announced that he will name Mark F. Kohler of North Haven to fill the vacancy of the Office of the Secretary of the State created by the anticipated resignation of Secretary Denise Merrill, who announced her intention earlier this week to step down from her elected office effective at noon on June 30, 2022.

Kohler retired earlier this year following a 30-year career in the Connecticut Office of the Attorney General, serving as an associate attorney general. During his three decades with the office, he served within several of its divisions, most notably from 2011 to 2021 as the head of the Special Litigation Department, which is responsible for representing all state constitutional officers, the legislature, and the judiciary, with responsibilities over election matters, charities, gaming, and federal Indian tribal issues. In this role, Kohler supervised all department litigation and agency counseling, and provided formal and informal opinions to state officials and agencies regarding a wide range of constitutional and statutory questions.

Governor Lamont explained that Kohler’s three decades of service in a leadership position at the Office of the Attorney General provides him with a considerable amount of experience that will benefit him as Secretary of the State. He also explained in making the decision that it was important that the person have no interest in declaring their candidacy for the office to ensure that this short-term appointment be clear of politics.

“Mark is incredibly well-respected as a levelheaded, tactful, and experienced attorney who has a considerable understanding of Connecticut state statutes, particularly those concerning the operations of our elections and government administration,” Governor Lamont said. “The circumstances surrounding the need to fill this vacancy are very unfortunate, but I am pleased that Mark has agreed to step away briefly from his retirement and return to state service. I am confident that this will be a smooth transition, and that the staff of dedicated professionals that Secretary Merrill has led during her nearly 12 years in office are ready to continue carrying out the office’s duties on behalf of the people of Connecticut.”

“I am honored and humbled to be named by Governor Ned Lamont to serve out the remainder of this term and continue my public service on behalf of the people of the State of Connecticut,” Kohler said. “I have the utmost respect, appreciation, and admiration for the work Denise Merrill accomplished in this role, and I look forward to working with her dedicated team of professionals to ensure that our elections are carried out in an accessible, fair, and transparent manner. I thank Governor Lamont for this tremendous honor, and I look forward to carrying out the work of the state.”

Kohler earned a Bachelor of Arts degree from the College of St. Thomas in St. Paul Minnesota in 1982; a Master of Arts degree in political science from Indiana University in Bloomington, Indiana in 1984; and a Juris Doctorate from the University of Connecticut School of Law in 1987.

He held elected office in the Town of Woodbridge Zoning Board of Appeals from 2006 to 2009.