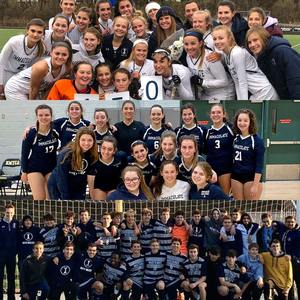 Immaculate High School has sent five Fall teams to their respective State Tournaments this season, with boys soccer, girls soccer, field hockey, girls volleyball and girls swim all qualifying based on their regular season winning records. Immaculate also saw cross-country athletes competing in both the State Open and New England meet, and ATI  football (co-op team with Abbott Tech) is in the running for a State playoff spot with a winning record so far of 7-1.

Now, as a result of quarterfinal games this past Thursday and Friday, Immaculate has three teams headed to the CIAC Class S State semifinals this week! Field Hockey topped Morgan by a score of 7-0 before emerging victorious in the quarterfinals over No. 6 seed Northwest Catholic 5-2. The top four seeds in the State Tournament have all prevailed thus far and will meet up this week on their run to the championship. Immaculate, the defending Class S State champion, is the No. 3 seed (17-1-0) and will take on No. 2 seed, North Branford (17-0-1) on Tuesday, November 19 at 5:45 p.m. at Cheshire High School.

Boys Soccer (11-5-3) entered the State Tournament as the No.15 seed. They knocked off Griswold at home 3-1, followed by a 2-1 victory over Litchfield (No. 2 seed) on the road. The team then returned to Mustang Valley to take on Old Lyme on Friday, emerging with the big win in front of their cheering fans by a score of 2-0. They have punched their ticket to the semifinals of the State Tournament for the first time since 1997 and will face Holy Cross (No. 3 seed) on November 19 at 7:00 p.m. at Trumbull High School.

Girls Volleyball (17-6), in only its sixth year as a varsity team, has had an incredible run of their own this season. Immaculate, as the No. 10 seed, defeated East Hampton 3-1 to kick off the tournament, followed by an exciting match topping No. 7 seed Cromwell 3-2. They then went on the road for a quarterfinal matchup against the No. 2 seed Aerospace, sweeping them in three sets to put them in the Class S semifinal game for the program’s first time. They will face No. 3 seeded Lyman Memorial on November 19 at 6:00 p.m. at Southington High School.

“While Immaculate is known for its students’ academic achievements, we have had an extraordinary tradition of athletic excellence for 50+ years and this Fall season is no exception,” said Nelson Mingachos, IHS Athletic Director. “I am incredibly proud of our coaches and student-athletes who work tirelessly and represent our school so well.” Mingachos noted that many of the current varsity field hockey and volleyball players first picked up the sport as Immaculate freshmen. “It is remarkable how far so many of our athletes have come in such a short time. These kids can find their passion and excel at Immaculate,” he said.