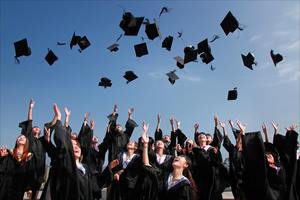 Despite an overall decline in school enrollment, the number of people enrolled in graduate and professional school in the United States jumped 8.1% from 2011 to 2018.

From October 2011 to October 2018, the total number of people enrolled at all levels of school declined by 2.2 million to 76.8 million people, according to recently released data from the U.S. Census Bureau’s Current Population Survey School Enrollment Supplement.

Over the same period, the number of students in graduate and professional school increased by 307,000 to 4 million.

Among those in graduate school, 38% were in their first year and half were working full-time.

From 2011 to 2018, undergraduate college enrollment dropped by 1.8 million. During the same period, the number of students enrolled in two-year colleges dipped by 25%, or 1.4 million, to 4.3 million.

Over the past 15 years, there has been a notable shift in the race and Hispanic origin makeup of students:

The race and Hispanic origin composition of college enrollment also changed from 2003 to 2018:

Erik Schmidt is a survey statistician in the Census Bureau's Social, Economic and Housing Statistics Division.