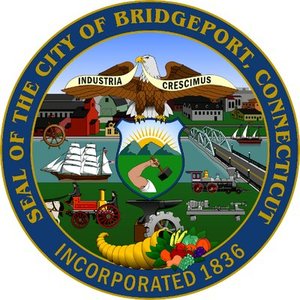 On Monday afternoon at approximately 1430hrs, Bridgeport School Resource Officer Carlos Carmo Jr. performed a heroic act by stopping an SUV that was rolling downhill on Boston Avenue with two individuals, one in the passenger seat and one on the back seat, but no driver.

Officer Carmo was assigned to the Harding High School Safe School Corridor this past Monday. Like any other school day, dismissal brings a flood of students to the sidewalks and crosswalks in the area of Boston Avenue as they make their way home.  This day was like no other, except that an SUV parked on Boston Avenue facing East, down the hill slowly left its park position, made its way into moving traffic and was heading towards a barrier and group of students walking home from school. Officer Carmo noticed the runaway SUV, chased the car on foot, grabbed onto the passenger side door, and completely brought it to a halt by grabbing onto the door frame and dragging his feet along the ground.  Carmo sustained minor injuries during the incident and was treated and released from the hospital.

Officer Carmo has been with the Bridgeport Police Department for four years.  He is being recognized for his bravery, selflessness, and quick thinking in this emergency situation that could have been tragic had he not intervened.