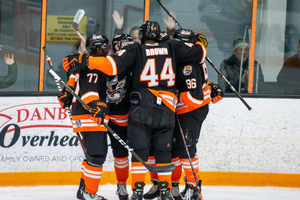 Sometimes all it takes is a fortunate bounce.

A wonky deflection off the Danbury Arena glass provided a prime scoring opportunity for Carter Shinkaruk late in regulation time as the Hat Tricks fended off the Elmira Enforcers for their 13th win in 14 games.

The first period elapsed with neither team surrendering a goal, the first scoreless opening frame at Danbury Arena this season. Dustin Skinner would get the tip of his stick on a Dale Deon shot from the blueline to open up the scoring in Elmira's favor.

A nifty passing play would knot the score midway through the second, as Vlad Gavrik maneuvered the puck from his belly to Gordy Bonnel, who in turn found Casper Dyrssen in front of the net for a Danbury goal.

Tied heading into the third period, Elmira's Willie Daigneault would be called for a five-minute major boarding penalty. Shortly thereafter, Brendan Hussey was whistled for tripping, giving the Hat Tricks a 5-on-3 powerplay. Cory Anderson would slip a wrist shot under the leg pad of Michael Stiliadis to give the Hat Tricks a 2-1 lead.

Daigneault would redeem himself later in the period, banging home a point-blank chance past Hat Tricks netminder Nick Niedert.

With each team trading chances in the third, a Nicola Levesque dump-in appeared to be rattling its way around the glass of the Elmira zone, with Stiliadis vacating his net anticipating the puck. A fortuitous bounce off the divider popped the puck out to the open slot, where Carter Shinkaruk was waiting to backhand the eventual game-winner home.

Niedert would stand tall in the final minutes of regulation, turning aside 30 of 32 shots on goal.

"He's a competitor, he's a pro," head coach Billy McCreary said of his netminder. "He's been working hard these last few weeks waiting for his opportunity. We had all the confidence in the world he'd be able to get the job done."

Niedert's win is his first in a Hat Trick uniform. After starting the first game in Hat Tricks history (an overtime loss on home ice) and dropping a regulation game in Danville, he had not made an appearance since November 2nd.

"We're a resilient team," McCreary elaborated. "We've got guys that just step in and get the job done, it's why we're sitting where we are in the standings.

The Hat Tricks now turn their attention to the Carolina Thunderbirds, who they will square off with in Bloomington, Illinois on January 3rd and 4th.