WBT's Lend Me a Tenor Hits a High Note 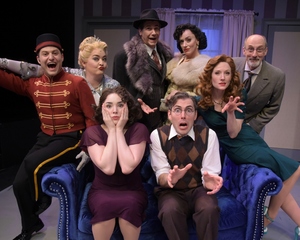 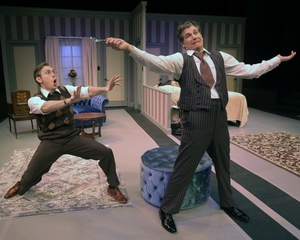 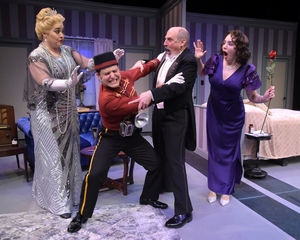 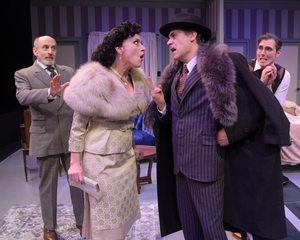 Westchester Broadway Theatre's season opener, Lend Me a Tenor, is an enjoyable evening of farcical comedy.  It's 1934 and the Cleveland Grand Opera Company is primed to welcome world-famous singer Tito Merelli, known as Il Stupendo, the greatest tenor of his generation, to appear for one night only as the star of the opera.

This award-winning play is not a musical nor a dance extravaganza, but this fantastic octet of actors are extremely entertaining. We are treated to a few little musical interludes by Tito (Joey Sorge) and Max (J.D. Daw). Their duet was entrancing, and Daw's solo operatic vocals were outstanding - leaving you wanting more. These poor guys are put through a comedy of errors thanks to the engaging cast of characters. Kathy Voytko played Maria, Tito's beautiful and fiery Italian wife. Voytko's comic timing was perfect, as was the touching scene as she silently deals with her decision to leave her husband. Tregoney Shepherd's Julia was captivating as the grande dame of the opera. Rounding out the cast are Molly McCaskill as Maggie, Phillip Hoffman as Saunders, Hannah Jane McMurray as Diana, and Sam Seferian as the Bellhop.

For those familiar with the play, you'll notice a few changes including the Opera is Pagliacci instead of Othello - which thankfully eliminates the use of black face. The use of clown makeup and costume fits the play to a T. However, I was disappointed that the traditional post-show elaborate curtain call where the actors pantomime the entire action of the play in less than 3 minutes was illuminated from this production.

Once the exposition is laid out, the play is fast-paced as the characters come in and out of the multi-door set designed by Steve Loftus. The costumes, especially the ladies' attire, by Keith Nielsen epitomized the era stunningly and, as always, Lighting by Andrew Gmoser set the mood perfectly for each scene.

If all this wasn't enough to entice you to see the production - the Westchester Broadway Theatre has a generous Special Offer for Free Dinner with Show Tickets for Lend Me a Tenor. Don't miss this amazing opportunity to see this production running through January 26, 2020.

World-renowned tenor Tito Merelli has signed on to sing in Pagliacci at a Cleveland opera company in the fall of 1934. He arrives late and, through a set of crazy circumstances, passes out after mixing wine with a huge dose of tranquilizers. Believing that the divo is dead, the excitable opera manager taps his hapless assistant, an aspiring singer named Max, to suit up as the clown and replace Merelli. Through a series of mishaps, two clowns are soon running around in costume. Meanwhile, the tenor’s jealous wife, his ambitious female co-star, Max’s young girlfriend and the flirtatious head of the opera guild are on the scene fighting—sometimes literally—for the star’s attention. The winner of 3 Tony Awards and 4 Drama Desk Awards, this madcap, screwball comedy is guaranteed to leave audiences teary-eyed with laughter.

Lend Me a Tenor was produced on both the West End (1986) and Broadway (1989). It received nine Tony Award nominations and won for Best Actor (Philip Bosco) and Best Director (Jerry Zaks).