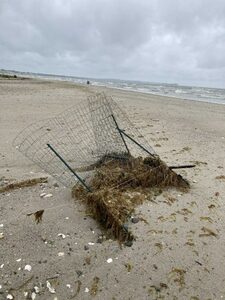 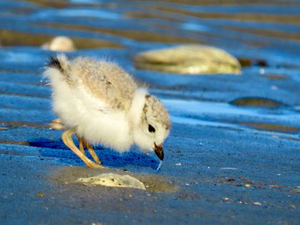 A succession of high tides during the full-moon period combined with a days-long storms washed away more than a dozen coastal waterbird nests at Milford Point over Memorial Day weekend.

The tides flooded the Milford Point sandbar, eroding its higher elevations. The sandbar is now smaller, with significantly less habitat for the birds.

Nine pairs of birds are already trying to nest again, so with your help the nesting season won’t be a total loss.

With a smaller area for the birds to nest on, a successful subsequent attempt will require Connecticut Audubon to increase patrols by coastal rangers.

It also will require people who visit the sandbar to be extra careful in avoiding nesting birds, and roosting migrant flocks, to obey the signs and fences, and to heed the suggestions of Connecticut Audubon staff who are patrolling the beach.

The birds that nest on the sandbar — Piping Plovers, American Oystercatchers, Least Terns, and Common Terns — are listed as either endangered, threatened or special concern in the state; Atlantic Coast Piping Plovers are listed as threatened federally.
.
They nest only on beaches, so even in the best of times their habitat is limited.

Piping Plover nests in particular are well camouflaged, and people walking on the beach can inadvertently step on them. When the birds are incubating their eggs, walkers who come too close can drive them off the nests, leaving the eggs at the risk of predators and to hot or cold weather.

And when the eggs hatch, the babies are tiny, out on their own, and vulnerable to numerous threats.

But a comprehensive program of active coastal bird protection can be highly effective in keeping them safe.

The Audubon Alliance for Coastal Waterbirds, which Connecticut Audubon is part of, deploys dozens of volunteers and staff across the state’s beaches to protect and monitor nesting areas. Patrick Comins, Connecticut Audubon’s executive director, said that because of the alliance, Piping Plovers and American Oystercatchers have both been unusually successful in fledging young birds at Milford Point, and in Connecticut in general, in recent years.

Despite the recent flood, we are confident some of the birds can still nest successfully in 2021, but it will depend in part on greater protection and help from the public.

HELP PROTECT NESTING BIRDS AT MILFORD POINT AND OTHER BEACHES

• Do not walk into roped-off areas

• Do not approach the nest exclosures

• Heed the signs that say “Stay Away”

“These birds all have small, vulnerable populations, and they’re protected by the federal and state government,” he said. “We know that everybody cares about their well-being but that still requires visitors to observe the signs and fences we’ve put up to protect the birds, and to heed the instructions of our staff on the beach to keep your distance.”

“It was really dramatic”

Before the storms, there were 13 pairs of Piping Plovers at Milford Point, and 10 of those pairs were nesting. Four pairs of American Oystercatchers were nesting as well.

Katerina Gillis, Connecticut Audubon’s coastal ranger at Milford Point, said: “Nearly the entire spit was covered with water for almost three days at high tide. You should see what it looks like right now — the spit is almost completely level with the water. It caused a lot of erosion.”

George Amato, a member of Connecticut Audubon’s Board of Directors and the chair of the Coastal Center’s board, went out to check the sandbar on Saturday and Sunday of that weekend.

“It was really dramatic with the Sound still pouring across the sandbar and fences and exclosures washed down,” he said.

Keep your distance, heed the advice

Although the nests are gone, the adult birds and some older chicks survived — they were able find the last vestiges of higher ground or to fly away at high tide. The Piping Plovers are trying to nest again.

“We’re seeing tons of copulation and territorial disputes, so within the next week we will have re-nests,” Kat said. “It’s early in the season. We can possibly see re-nests until the end of June.”

Adult Piping Plovers need 30 days to fledge their chicks, at which point the young will be safe as well, barring another unusually high tide. American Oystercatchers, Least Terns and Common Terns will be trying to nest there as well.

To give them the best chance, Connecticut Audubon will be working on a plan to increase patrols to help visitors avoid disturbing the birds.