Danbury Westerners Baseball is Back! A Preview of the 2022 Summer Season 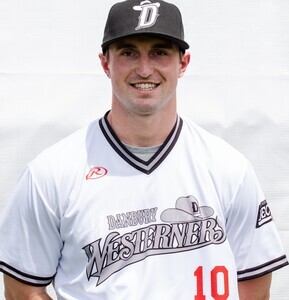 Westerners’ fans, the time has come! Queue Dave King’s league-renown theme song and start blaring “Come On Eileen” on your radio because NECBL baseball is back!

After waiting patiently for 294 days, the defending champion Danbury Westerners will enter their 28th year of competition in the New England Collegiate Baseball League (NECBL), making them the oldest active team in this collegiate summer baseball league. The best college baseball players from all over the country will come together to work on their crafts and bring another championship home to Danbury.

Danbury native Ian Ratchford will enter his fourth year coaching the Westerners and his second season as their manager. Ratchford finished his third year as head coach of UConn Avery Point this spring, leading the team to a 24-13-1 record and a District Finals appearance. This summer, he will strive to win his second NECBL championship in as many years at the helm.

“I’m looking forward to getting to know all the guys better this season,” Coach Ratchford said. “I’m excited to work with such talented ballplayers and help them achieve their goal of playing professional baseball. We’re going to get better every day and focus on the task at hand.”

The rest of Ratchford’s coaching staff will include assistant coach Conor Farrell and hitting coach Bobby Rodriguez, and both will be entering their second season with the Westerners.

The NECBL became a 14-team league in 2021, so they decided to shift from two to three divisions for the 2022 season. The Westerners will compete in the West Division, and there will be a Coastal and a North Division that have five teams apiece. Danbury’s divisional foes will be the Bristol Blues, North Adams Steeplecats, and the Valley Blue Sox, and they will play them eight times each. They will also play every interdivisional opponent twice to account for a 44-game schedule over 53 days.

This three-division layout will include a new six-team playoff bracket that has the two division winners with the highest regular-season winning percentages earning byes. The quarterfinals will be single-elimination contests, and the semifinal and championship rounds will be best-of-three series.

It was long overdue, but the Westerners earned their first Fay Vincent Sr. Cup last summer after sweeping the North Shore Navigators in a best-of-three series. Danbury went 23-19 in the regular season, which was good for fourth place in the Southern Division, and they finished 30-20 overall after an incredible playoff run. In a Covid-friendly playoff format, the Westerners achieved a magnificent 7-1 record by coasting past the Newport Gulls, dominating the Valley Blue Sox, edging out the first-place Martha’s Vineyard Sharks, and sweeping the North Shore Navigators in the championship series.

“We had a really gritty team, and everyone meshed well,” Coach Ratchford added. “There were no holes 1-9 in our lineup, so we did a great job of getting into the other team’s bullpen early.”

During this NECBL championship journey, the Westerners boasted the second-best scoring offense with 258 runs scored and 44 home runs, making them a nightmare for opposing pitching throughout the season. This season, they will bring back six members of the championship roster. Renn Lints, Kyle Roche, Noah Jensen, and Sean Hogan will return to the pitching staff, and Hank Thomas and Henry Strmecki will come back to add depth to the Westerners lineup. All the returning Westerners are feeling confident that they can claim another championship this summer.

“It was an amazing experience winning a championship last summer,” Renn Lints said, a rising senior at Bucknell University. “All the returners know what it takes to win in this league, so we’re looking forward to competing every day and putting a great product on the field.”

All the returners were impact players during last year’s title run, especially University of Dayton outfielder Henry Strmecki. Strmecki posted a remarkable .375 average with four home runs and ten RBIs during his playoff action. Roche, Hogan, Lints, and Jensen also combined for a 3-0 record and a 2.13 ERA during this eight-game span.

The Westerners will also welcome Eastern Connecticut State University superstar pitcher Billy Oldham, a Brookfield, Connecticut native that played two seasons for Coach Ratchford as a member of the Connecticut Rangers’ 13U and 14U AAU teams. Eastern is the #2 team in the country for Division III baseball with a 44-3 record and is currently competing in the NCAA Division III World Series. Oldham has a 10-2 record with a 2.48 ERA for the Warriors this season and has fanned 104 batters in 83.1 innings pitched, making him an excellent addition to the Westerners pitching staff.

The Westerners will begin to defend their crown at Rogers Park on Tuesday, June 7 against the Ocean State Waves at 6:30 pm, and they will end their season at home by facing the Bristol Blues at the same time on July 30. Check out the NECBL website for the full Westerners schedule and follow our Instagram, Twitter, and Facebook for player announcements, schedule announcements, game day updates, and much more.

Slambury is ready for some fireworks this summer. The vibes will be immaculate, Westy will be as entertaining as always, and Rogers Park will have many fun and creative themes for the fans throughout the season. Come and support your Danbury Westerners and watch summer baseball at its finest.