CARRIE: THE MUSICAL Opens This Weekend at the Sherman Playhouse 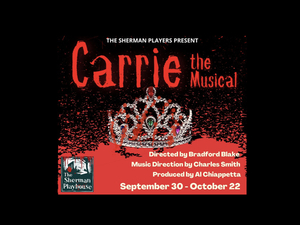 On September 30th, The Sherman Playhouse will open its third production for the 2022 season, CARRIE: THE MUSICAL, directed by Bradford Blake (2021’s WRECK THE HALLS and 2019’s CABARET) with music direction by Charles Smith. Produced by Al Chiappetta, the curtain rises at 8:00 p.m. for a four week run.

CARRIE: THE MUSICAL, adapted from Stephen King’s terrifying 1974 novel, features a score by Michael Gore and Dean Pitchford (Fame, Footloose, Camp) and book by original screenwriter Lawrence D. Cohen. The musical tells the story of teenager Carrie White (Kennedy Morris), who longs to be seen. At school, she’s bullied by the popular crowd, and virtually invisible to everyone else. At home, she's dominated by her cruelly controlling mother Margaret—a religious fanatic (Tracey Marble). While navigating the difficult terrain of high school, Carrie discovers an uncommon power within herself; telekinesis. CARRIE: THE MUSICAL has only grown in popularity since its notorious 1988 Broadway premiere (which opened and closed after only five regular performances) due in part to footage of the original production going viral and high profile revivals around the world, including a 2012 revival at New York’s MCC Theater, upon which this version is based. An episode of TV’s “Riverdale” was even dedicated to this killer musical which features such hit numbers as “And Eve Was Weak” and “A Night We’ll Never Forget.” CARRIE: THE MUSICAL contains strong language and themes and is not suitable for younger audiences.

“We are thrilled to be bringing the updated and revised version of CARRIE: THE MUSICAL to our stage” said Sherman Playhouse artistic director Matt Austin. “The original CARRIE: THE MUSICAL was one of those mythical Broadway flops. Everyone claims to have seen it, but after a mere 21 public performances the original musical was never seen again.  However in 2012 the original creative team decided to revise the show to mount a successful off-Broadway revival – and to say it became a cult hit is an understatement! I was one of those fans of the revival and it’s been a bucket list dream to bring it to Sherman, and the show could not be in better hands with one of the area’s foremost directors, Brad Blake.”

Please note that, again in line with wider policies regarding COVID-19, face masks will continue to be required to be worn at all times while inside the theater.

Reservations can be made online at shermanplayers.org or by calling the box office at (860) 354-3622.

The Sherman Playhouse is a non-Equity theater company located at 5 Route 39 North (next to the firehouse) in Sherman, CT.