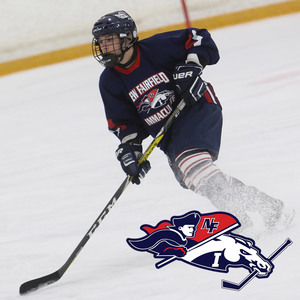 Immaculate High School has enjoyed impressive growth in enrollment over the last few years. With a strong academic reputation as well as a thriving athletics program, the influx of talented student-athletes has resulted in recent State championships in boys basketball and girls track, SWC Championships for girls soccer, girls field hockey and boys golf as well as numerous individual athlete awards and honors and a hockey program that has been on the rise toward becoming a DI threat.

The team, in its final season as a cooperative, features student-athletes from Immaculate and New Fairfield High Schools. Instructed by CIAC to break up the co-op this upcoming season or be declared ineligible for the State tournament would have meant leaving the New Fairfield skaters out in the cold. Faced with an unfortunate decision, the team voted to play their final season as the co-op, forgoing a chance at States.

“There wasn’t really a choice. It’s a tough call and really disappointing to have to miss States,” said Ryan Fanella, IHS senior co-captain. “But there was no way anyone could imagine not playing together. The team always comes first.”

"We are very appreciative of all of the support from our families - especially New Fairfield High School for their amazing contributions and partnership over these many years,” said Tim Dunn, Athletic Director of Immaculate. The co-op team plays home games at the Danbury Ice Arena.

With then-coach Larry Vieira on the bench, the team has achieved tremendous growth while overcoming the challenges that come with it. In just four seasons they went from a DIII to a DI classification, playing a challenging first-year DI schedule last season and skating to a 13-5-3 record, with outstanding efforts that fell just short against DI stalwarts such as Xavier, Notre Dame Fairfield and Fairfield Prep.

Unfortunately, Coach Vieira recently resigned, resulting in an urgent need to replace the leadership and skill he took with him. Immaculate High School has begun looking for his successor with input from student-athletes, parents, administrators and alumni from across the co-op.

“Coach Vieira did an admirable job growing the program to the successful one that we enjoy today,” explained Mary Maloney, President of Immaculate since 2014. “We see this as an opportunity to find someone who can have immediate impact not only on this upcoming season, but working together to continue building out a comprehensive and sustainable program for the future of Immaculate Mustang hockey,” she said.

“The program is healthier than it’s ever been,” explains the Parent-Alumni Booster President and search committee chair Brian DiNatale. “Since the end of last season, the administration has been working with the coaching staff, team, parents and others to ensure that the program has the backing it needs to grow and excel. Support for a full coaching staff includes specialized goalkeeping and off-ice training for full varsity and junior varsity squads. The program will continue to challenge and develop our incoming freshmen as well as our accomplished seniors,” Mr. DiNatale added.

The right coach would put them over the top, asserts IHS board member Bernie Reidy. “The search effort is in full swing, with several highly qualified candidates already expressing an interest. I can’t imagine a better situation for a coach to walk into.”

The upcoming season’s schedule, which features more in-state DI opponents, as well as tests against high-level out-of-state competition, will present challenges to any coach, and Immaculate is focused on hiring a coach capable of stepping in and making an immediate impact on the team, while also building for the future success of the program. “This season will not be a disappointing one, winning is still the goal and our challenging schedule will remain. An SCC/SWC championship is the goal for the end of the year,” said Sam Mitchell, the NFI senior co-captain said.