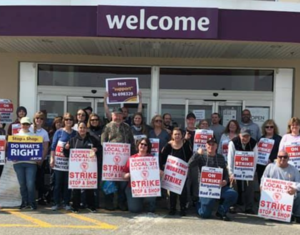 All across CT Local 371 Union Members are on strike including the New Fairfield Stop And Shop at 25 CT-39, New Fairfield, CT.

Some residents have decided to cross the picket lines as Stop and Shop's modified hours are 8am - 8pm until the strike ends.

After months of trying to bargain for a fair contract, it has become apparent that our only choice is to take a job action. All New England UFCW members employed at Stop and Shop are on strike at the 253 stores in New England. Please honor your sisters’ and brothers’ picket lines and shop at these other grocery stores who have workers represented by UFCW: