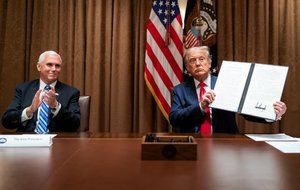 The new executive order combats the misuse of H-1B visas, which too often have been exploited to replace qualified U.S. workers with lower-cost foreign ones. President Trump is directing all federal agencies to focus on hiring Americans for lucrative federal contracts, and it requires that only U.S. citizens be appointed to the government’s competitive service.

The decision comes following news that the Tennessee Valley Authority (TVA)—created in 1933 as part of President Franklin Roosevelt’s New Deal—planned to outsource 20 percent of its technology jobs to companies based in foreign countries. That action alone would’ve put more than 200 American jobs at risk.

Outsourcing hundreds of jobs during a global pandemic would be especially detrimental to these workers, their families, and their communities the administration said..

During the meeting to sign the executive order, President Trump was informed that TVA CEO Jeff Lyash had just called and “indicated a very strong willingness to reverse course” on the outsourcing plan and other American workers will be protected going forward, too. “We're not just solving your problem,” Vice President Mike Pence told workers gathered at the White House today. “What the President's committing to today is to end the abuse of our worker visa program, once and for all.”