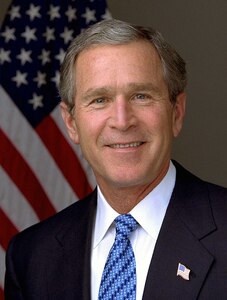 George Walker Bush is a politician and businessman who served as the 43rd president of the United States from 2001 to 2009. He was born on July 6, 1946, at Grace-New Haven Hospital which is now Yale New Haven Hospital, in New Haven, Connecticut while his father was a student at Yale. He was the first child of George Herbert Walker Bush and Barbara Pierce. He was raised in Midland and Houston, Texas, with four siblings, John, Neil, Marvin and Dorothy. Another younger sister, Robin, died from leukemia at the age of three in 1953.

His paternal grandfather, Prescott Bush, was a U.S. Senator from Connecticut. His father, George Herbert Walker Bush was Ronald Reagan's vice president from 1981 to 1989 and the 41st U.S. president from 1989 to 1993. Bush has English and some German ancestry, along with more distant Dutch, Welsh, Irish, French, and Scottish roots.

While George Walker was young, the family moved to Texas where he was educated and eventually became owner of the Texas Rangers, a major league baseball team, and then a two term governor. In 1999, Bush signed a law that required electric retailers to buy a certain amount of energy from renewable sources (RPS), which helped Texas eventually become the leading producer of wind powered electricity in the U.S.

When he won the Presidency in 2000 he became the 43rd president of the United States. Bush was the first person to win an American presidential election with fewer popular votes than another candidate since Benjamin Harrison in 1888.