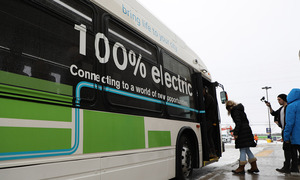 TCI-P* is a multi-jurisdictional program that will guarantee that Connecticut achieves at least a 26% reduction in carbon emissions from transportation by capping carbon pollution and investing $1 billion in clean transportation solutions between 2023 and 2032. Those investments could include new infrastructure projects, transit programs, and quality-of-life improvements such as increasing the number of trains on the Waterbury Line from 15 to 22 each weekday, continuing the free weekend bus service Governor Lamont announced this week, and building new sidewalks, bike lanes, and biking and walking trails.

Since December, when Governor Lamont signed the memorandum of understanding to join TCI-P, the administration has met regularly with equity and environmental justice stakeholders on design and implementation of the program, identifying additional investments to the TCI-P. Substitute language for the legislation that advanced out of the committee today includes several such improvements, including increasing by 50% the minimum amount of TCI-P revenues that must be spend on communities overburdened and underserved by the transportation system. This commitment exceeds the TCI-P’s minimum commitment of 35% to environmental equity focused reinvestments and ensures that communities that suffer the most from air pollution and rural communities realize the benefits of this program.

“The Environment Committee’s leadership in advancing Connecticut’s implementation of TCI-P is a positive step in our state’s comeback and our commitment to a cleaner environment and modernized transportation system and infrastructure,” Governor Lamont said. “This is really about improving the future for our children and generations to follow through cleaner air, better health, and more equitable quality of life and opportunities.”

“Implementing TCI-P will enable tangible action to mitigate the impact of the climate crisis, which is here and now,” Connecticut Energy and Environmental Protection Commissioner Katie Dykes said. “TCI’s proven cap-and-invest approach delivers significant benefits of reduced pollution and improved health in a way that will provide for a better quality of life for Connecticut citizens. I applaud the Environment Committee for ensuring that a minimum of 50% of TCI-P investments will support communities that are overburdened by air pollution and underserved by the transportation system.”

“Transportation is the largest source of air pollution in Connecticut,” Connecticut Transportation Commissioner Joe Giulietti said. “It’s time for transportation to be the solution instead of the problem. I want to thank the Environment Committee for their focus on solutions and their leadership on TCI-P, which is the state’s fundamental path forward for building healthier and safer communities in Connecticut for this generation and the next.”

The passage of this legislation out of committee coincides today with the American Jobs Plan announced by President Joseph R. Biden, Jr. The $2 trillion infrastructure plan calls for $174 billion in investment in the electric vehicle market, establishing grant and incentive programs for state and local governments and the private sector to build a national network of electric vehicle chargers by 2030. The TCI-P program will position Connecticut well to compete for this funding and keep the state at the forefront of modernizing its transportation infrastructure.

The legislation is SB 884, An Act Reducing Transportation-Related Carbon Emissions.

**Twelve states in the Northeast and Mid-Atlantic along with DC are proposing to invest billions every year for the next decade in clean transportation under a new policy framework released today by the Transportation and Climate Initiative (or “TCI”).

TCI is a collaboration of twelve states in the Northeast and Mid-Atlantic region, including Maine, New Hampshire, Vermont, Massachusetts, Rhode Island, Connecticut, New York, New Jersey, Pennsylvania, Maryland, Delaware and Virginia. Together the states of the TCI region represent a population of 72 million people with a GDP larger than any country other than the United States and China.