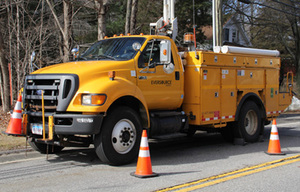 Governor Ned Lamont today announced that he has proclaimed a civil preparedness emergency – also known as a state of emergency – in response to the widespread power outages caused by the impact of Tropical Storm Isaias on the State of Connecticut. The declaration authorizes the governor to order certain actions that will help expedite the response.

“With more than 700,000 customers experiencing power outages, we need to take several emergency steps that will facilitate restoration,” Governor Lamont said. “I remain in consistent communication with municipal leaders and utility officials so that we can move resources to where they are most needed at this time. I continue to have regular communications with our Emergency Operations Center, which is managing both the response to this storm and our continued response to COVID-19.”

Locally, 3,498 Eversource customers in New Fairfield still do not have power restored. That is 57% of the Customers in town according to the eversource.com outage map. The company has not yet provided an estimated time power may be restored to those customers.