Details
Published on Tuesday, 17 November 2020 11:02
Written by Office of the Governor. 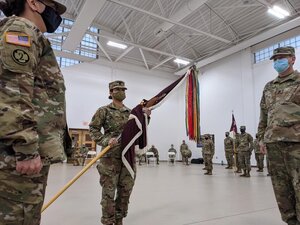 Governor Ned Lamont today announced that he sent a letter to President Donald J. Trump requesting that he extend the federal authorization for the Connecticut National Guard to provide support to the State of Connecticut through June 31, 2021, for its ongoing response to the COVID-19 public health emergency. In addition, he is requesting a 100 percent federal cost share on behalf of the state.

Previously, the state was authorized to use the National Guard with a 100 percent federal cost share from April 2 through September 30. The National Guard is currently providing the state with support under an authorization that began October 1 and is set to end December 31, however the federal cost share for this period has been reduced to 75 percent. It is estimated that Connecticut’s 25 percent cost share during the current authorization will cost the state approximately $2.5 million, adding to the fiscal burden caused by the pandemic.

“Between constructing mobile field hospitals, delivering PPE, supporting the needs of nursing homes, and assisting the operations of testing sites, the Connecticut National Guard has been a critical component of our state’s response to the COVID-19 pandemic,” Governor Lamont said. “And it must also be noted that the Guard’s support goes beyond assistance to state government – this authorization means it can provide assistance to our towns, cities, and health care providers to help protect our communities. I thank the Guard for its commitment to the citizens of Connecticut and the impact they’ve made here.”

Since their initial mission began at the outbreak of the pandemic in March, more than 1,000 Connecticut National Guardsmen and members of the State Militia have been called to duty to support operations designed to enhance the state’s health care infrastructure. Tasks have included the erection of mobile field hospitals, delivery and distribution of millions of pieces of personal protective equipment, nursing home inspections and support, and testing kit assembly and collection.