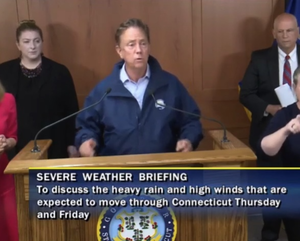 Governor Ned Lamont today announced that he is ordering a partial activation of the State of Connecticut Emergency Operations Center (EOC) beginning at 6:00 a.m. on Friday, July 9, 2021, to monitor conditions from Tropical Storm Elsa as it is anticipated to impact the state around mid-morning.

Governor Lamont has spoken with leadership of Connecticut’s utility companies, including Eversource and United Illuminating, and stressed to them the importance of having preparations in place and ready to deploy well in advance of the storm in the event of widespread power outages.

“Right now, it’s looking like Tropical Storm Elsa will bring Connecticut a high amount of rain that comes in addition to the already significant amount we’ve received over the last several days, which has left the ground saturated,” Governor Lamont said. “I urge everyone in areas prone to flooding to make preparations tonight and not wait until the storm arrives in the morning. I also urge everyone to keep all mobile devices fully charged in advance of the storm in case of power outages. I expect nothing but the best response from our utility companies to make sure Connecticut residents, particularly the most vulnerable, receive adequate service. We’ll continue to monitor the storm’s path and will provide updates as necessary.”