Details
Published on Friday, 14 May 2021 14:17
Written by The Ridgefield Playhouse 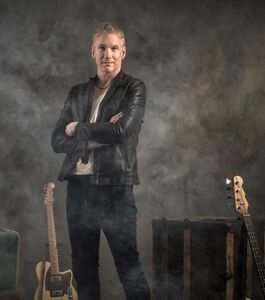 Eliot Lewis has a career most musicians could only dream about.  A singer, songwriter and multi-instrumentalist, Lewis has toured all over the world as a member of the Hall & Oates, as well as a key member of the Scottish funk outfit, The Average White Band.

Eliot has also been the only musician to appear on Daryl Hall’s incredibly popular, "Live From Daryl's House” show all while keeping his own solo career going at a seemingly impossible pace.

A Norwalk, Connecticut native, Eliot Lewis returns to The Ridgefield Playhouse on Sunday, June 20 at 7pm, outside at The Ridgefield Playhouse tent.  As we kick off Make Music Day in Ridgefield – join us for this Pepsi Rock Series Powered by Xfinity performance featuring Eliot’s original songs as well as rock hits from some of the 100 major artists that he has worked with including Billy Gibbons (ZZ Top), Joe Walsh, Todd Rundgren, Cheap Trick, Hall & Oates, Train, Rob Thomas, Jason Mraz, Darius Rucker and many more.  When Eliot plays a cover song, it’s typically a song he’s performed with that artist!  Media sponsor for the event is WEBE 108 fm.

Equally at home in front of 100 or 15,000, Eliot has performed on the world’s most legendary stages, including Madison Square Garden, Japan’s Budokan, Red Rocks, The Hollywood Bowl as well as Late Night with Jimmy Fallon, Conan O’Brien, The Today Show, NBC’s The Voice, Jimmy Kimmel Live and many others.  "Eliot is a musician who can do it all, great singer, songwriter and guitarist. He rocks and he's got soul. No one does it quite like him" says Daryl Hall.  Earlier in his career, Eliot worked alongside the late Dan Hartman and performed on several hit songs produced by Hartman including Tina Turner’s “Simply The Best” and Joe Cocker’s “Unchain my Heart”

For more information or to purchase a touchless print at home ticket ($30) go online at www.ridgefieldplayhouse.org or, you can visit or call the box office (203) 438-5795.  The Ridgefield Playhouse is a non-profit performing arts center located at 80 East Ridge, parallel to Main Street, Ridgefield, CT and is committed to keeping the arts alive and available to all.