JCC Sherman presents Hate in the US: A Conversation with Kenneth Stern & Nadine Strossen 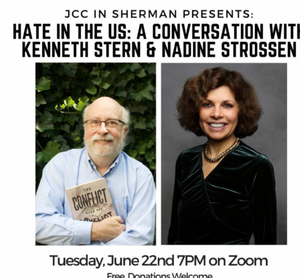 JCC Sherman presents Hate in the US: A Conversation with Kenneth Stern & Nadine Strossen on Tuesday, June 22 at 7pm.

Kenneth Stern will be interviewed by Nadine Strossen about understanding hate and antisemitism in the United States today, and the relationship between the two. How do we understand the level of hatred in the United States today, especially in the aftermath of the Capitol Insurrection, rising hate crimes against Jews and Asian Americans, and a year after the George Floyd murder? And do we have too narrow a lens when we think about antisemitism? What do we gain, or lose, when we think about it as a form of hate? And what are the best, and worst, ways to combat it?

Kenneth S. Stern is the director of the Bard Center for the Study of Hate and an attorney and award-winning author. For twenty-five years, he was the American Jewish Committee's expert on antisemitism, and he was also the lead drafter of the “Working Definition of Antisemitism." He has argued before the Supreme Court of the United States and testified before Congress, and he is a frequent guest on television and radio. His work has appeared in The New York Times, The Washington Post, USA Today, and The Forward. His newest book, The Conflict Over the Conflict: The Israel/Palestine Campus Debate (New Jewish Press, 2020), has been called a "must read," "thoughtful and provocative," a "gift," a "rare and uncompromising testament to free expression" and a "blueprint for how to navigate the ‘conflict over the conflict’ on campus.”

New York Law School Professor Emerita Nadine Strossen, past national President of the American Civil Liberties Union (1991-2008), is a leading expert and frequent speaker/media commentator on constitutional law and civil liberties, who has testified before Congress on multiple occasions.  The National Law Journal has named Strossen one of America’s "100 Most Influential Lawyers.”  Her 2018 book HATE: Why We Should Resist It with Free Speech, Not Censorship was selected by Washington University as its 2019 “Common Read.”   Strossen has served on the Anti-Defamation League’s Civil Rights Committee, and she has won awards from the Jewish Council for Public Affairs, the National Council of Jewish Women, and the Women’s League for Conservative Judaism.

This is a free virtual event on Zoom, donations welcome. We kindly ask you to please register online before the event by Tuesday, June 22nd 12PM. For more information and to register please visit our website www.jccinsherman.org.