JCC Sherman Presents The City Without Jews on January 29 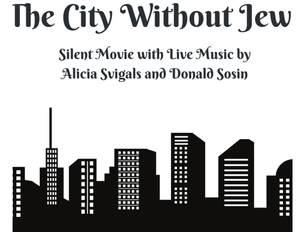 Jews are hounded by mobs and driven from Vienna in this 1924 expressionist film based on the satirical novel by Hugo Bettauer. The sensational film that anticipated the Holocaust and cost Bettauer his life was rediscovered in 2015. With commentary by film scholar Noah Isenberg (UT Austin) and a live score.

Recently restored and featuring a new soundtrack, The City Without Jews is one of few surviving Austrian Expressionist films, and the magnum opus of the great director H.K. Breslauer. Filmed in 1924, it can be seen as a chilling premonition of the Holocaust—the premise is the political rise of the Christian Social Party, which orders all Jews to evacuate Austria. In the ensuing months, the sober reality of a society without Jews sets in, as cultural institutions close and cafes are replaced with beer halls. Eventually, the economy declines and unemployment runs rampant.
Based on the dystopian book by Hugo Bettauer and intended originally as political satire, it became the subject of controversy and censorship, especially in conjunction with the rise of Nazism.World-renowned musicians Alicia Svigals and Donald Sosin will play their collaborative score that has brought audiences to their feet at Lincoln Center, the San Francisco Silent Film Festival, and two dozen other venues in the US and Europe.
Svigals co-founded the Klezmatics and has worked with Itzhak Perlman and the Kronos Quartet. Sosin has performed for silent films all over the world, from MoMA and BAM to venues in Bologna, Moscow, Shanghai and Bangkok.
Don’t miss this stunning event!