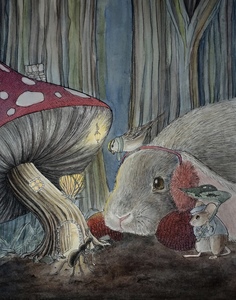 Eight Western Connecticut State University recipients of the Master of Fine Arts degree in 2019 will present their works in the M.F.A. Thesis Exhibition running from Tuesday, June 18, through Saturday, July 6, at the Blue Mountain Gallery in New York.

The exhibition is supported by the Jason and Ellen Hancock Student Endowment Fund, managed by the WCSU Foundation. An opening reception for the artists will be held from 5 to 8 p.m. on Thursday, June 20, at the gallery, located on the fourth floor at 530 W. 25th St. in Manhattan. Admission will be free to the reception and the exhibition, and the public is invited. The gallery will be open for viewing from 11 a.m. to 6 p.m. Tuesday through Saturday.

The Department of Art organizes the M.F.A. Thesis Exhibition each spring as a capstone experience demonstrating the personal artistic direction and mastery of candidates for the M.F.A. in Visual Arts, expressed in the works they present for viewing. The following M.F.A. graduates will show their works in this year’s exhibition: