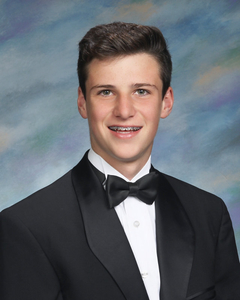 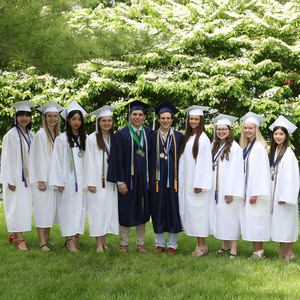 Sarah Bohling of Brookfield is the Class of 2019’s Valedictorian and Kristen Cirone of Newtown and Wenqi Angela Lai of Brewster are the Co-Salutatorians and were all recognized at the ceremony. Of the 124 members of the Class of 2019, 100% of those students who applied to colleges and universities were accepted and were awarded college scholarships and grants totaling $26 million. The top ten percent of students achieved a SAT score average of 1424, and nearly three-quarters of the class earned an average GPA of 3.5 or higher. At the graduation ceremony, President Mary Maloney told the graduates to “Empower yourself to empower others and never forget that your success is not determined by how much you own but by how much you live and love.”

Valedictorian Sarah Bohling will attend the University of Notre Dame as a Stamps Scholar and as a member of the Glynn Family Honors Society and major in Biochemistry. Sarah was an outstanding student at Immaculate, earning Distinguished Honors for her grades while successfully taking nine AP courses in her last two years of high school; additionally, she scored a perfect 800 on the SAT math section and a perfect composite score of 36 for the ACTs. At Immaculate, Sarah was a member of the National Honor Society, the Science National Honor Society and the Mu Alpha Theta Math Honor Society. She received numerous awards and honors, including the Isabelle T. Farrington Award, the Campus Ministry Outstanding Participation Award, the President’s Volunteer Service Award, the President’s Education Award, the Harvard Prize Book Award and was World Language Student of the Month. Sarah was an active member of the school’s Campus Ministry, Key Club, She’s the First Chapter and Model UN team, and was a cheerleader.

Co-Salutatorian Kristen Cirone will attend the University of Notre Dame and major in Accounting and Finance. At Immaculate, Kristen earned Distinguished Honors all four years of high school and was a member of the National Honor Society and the Mu Alpha Theta Math Honor Society. Kristen received the Diocese of Bridgeport’s St. Sebastian Award, the Fairfield University Book Award, and was captain of the IHS varsity field hockey, girls basketball and girls lacrosse teams (she helped lead the field hockey and lacrosse teams to the All Patriot Division and was a key member of the 2019 field hockey team that won the Class S State Championship). Kristen was also a Student Ambassador, International Student Mentor, Class Secretary and a member of several extra-curricular clubs including Key Club, Campus Ministry, Peer Leadership Club, Special Friends Club, Film Club and Math Club.

Co-Salutatorian Wenqi Angela Lai will attend Washington University in St. Louis and major in Architecture.  Wenqi received Distinguished Honors at Immaculate and was a member of the Mu Alpha Theta Math Honor Society and the Science Honor Society. She earned a perfect score (800) on the Math Level II SAT Subject Test, an advanced version of the regular SAT math portion. Wenqi received the President’s Education Award for Outstanding Academic Excellence and the Cornell Book Award. At Immaculate Wenqi was a member of the Art Club, the International Club, the Math League and Model UN. A clarinet performer who played in several youth orchestras, Wenqi also loves to visit museums and document her experiences -- she visited over 60 museums in more than 20 cities across the world and secured her impressions by writing travel notes that included illustrations and still-life sketches.

Rodolph Antonios was also named Immaculate High School's Student of the Year for the 2018-19 school year. Rodolph earned this honor for consistently demonstrating school spirit and dedication to IHS, strength of character and faith in action through kindness to others, and a passion for learning and going beyond what is expected, including encouraging others to do their best.

This graduating class contributed over 6,050 hours to a school-wide total of 24,762 hours of community service and several students were honored by the Danbury Exchange Club, the Danbury Rotary Club and the Diocese of Bridgeport for their service and academic achievements. Student-athletes received numerous individual athletic SWC and CIAC leadership and sportsmanship recognitions and the girls field hockey team, girls cross country team and boys cross country team won SWC and/or State Championships. Students were honored with academic, music and art awards, including Commendations from the National Merit Scholarship Corporation, Scholastic Arts and Writing Awards, Connecticut High School Fine Arts Awards, Halo Theater Awards and more. Other seniors were part of the Brave Engineers Team and Mock Trial teams that won major competitions.