New Milford Dad and Son Are Incoming Students At WCSU 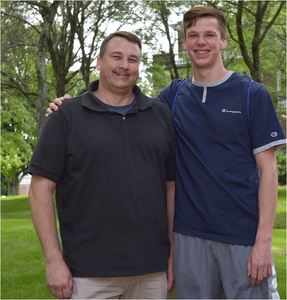 New Milford residents Doug and Brandon Muckerman were among the nearly 1,300 people who attended a summer orientation session at Western Connecticut State University in July. Summer orientation is a rite-of-passage for new college students everywhere, but what makes their situation unique is that Doug and Brandon are father and son — and both attended as incoming students. Approximately 11% of WCSU’s incoming undergraduates are nontraditional students like Doug.

Doug, 48, works at Cartus (a division of Realogy) in Danbury. He recently completed an associate degree at Naugatuck Valley Community College and transferred his credits to WCSU to pursue a CPA designation in accounting.

“I like numbers, and accountants deal with a lot of numbers; not to mention that they are among the first people in a company to know if it’s doing well or not,” Doug said.

Brandon, 18, was a third baseman on New Milford High School’s baseball team and is involved with the Old Time Baseball Club.

“I am interested in studying Criminal Justice while attending WCSU, and want a future career in law enforcement,” Brandon said.

As to who committed to WCSU first, dad led the way.

“That was me,” Doug said. “That was the plan all along: start at NVCC and transfer to WCSU for cost reasons.”

“I decided to attend WCSU because it is the most affordable option,” he said. “I don’t want to exit college with a lot of debt. I looked at a couple of other universities before selecting WCSU. What made up my mind was the overall cost.”

Now that father and son both will be students in a week, does either see a possibility for competition?

“Competitive? Yes, checking on GPAs,” Doug said. “I think more me on him — I want to make sure he passes all his classes. Not so much of who’s doing better, but if I am, I’ll be sure to let him know,” Doug said, smiling.

Brandon wasn’t too concerned about it.

“I’m sure my dad will want to see my GPA, but not to see if it’s better than his,” Brandon said. “I don’t think we will have classes together since we have different majors, anyway.”

Asked about whether they expect to run into one another on campus and how they will respond, son and father chimed in.

“Brandon and I do not have any courses together this semester, but one never knows,” Doug said. “My classes are restricted to night because of work so we probably won’t see each other; but if it works out — yes, we will probably eat together — only if I pay for it.”