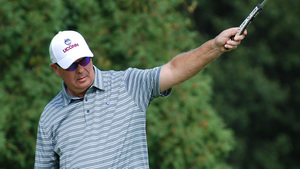 It’s a rarity, but when the 74th Senior Amateur kicks off in Old Lyme, there will be one single, definitive favorite. That’s Bill Hermanson. A Black Hall member, Hermanson has won 25 club championship here, in addition to, with partner Dave Szewczul, back-to-back Two Man Championships, which Black Hall hosts annually, in 2015 and 2016. Hermanson loves the course and it fits his game. To begin with, he’s long and straight off the tee.

“Black Hall has always been a course where a player has to drive the ball well,” he says. “That doesn’t necessarily mean long, though that helps. You simply can’t spray the ball the way you can at some courses. You’re not going to recover.”

Which is why, Hermanson says, Black Hall endures as a championship venue and why it’s such a good match for a strong Connecticut senior generation. (Thirteen members of this year’s field qualified for the New England Senior Amateur Championship at Biddeford-Saco Country Club in Maine, September 17-18).

“It’s a course where you just have to step up and hit good shots,” he says. “There’s not a lay-up hole out there really. Maybe the [par-5] second. But you can’t fake it at Black Hall.”

Designed by Robert Trent Jones at the peak of his powers in 1967, the course is fair but stern. Jones is an architect not as much in fashion today as he once was, but in Black Hall he used length, the challenge of many strategically positioned trees, elevated approaches to create a beautiful track where accuracy, as Hermanson says, is at a premium.

Past CSGA champions at Black Hall attest to that. Steve Sokol won the 2003 Open there. Jeff Hedden (2006) and Mike Kennedy (2017) won Mid-Amateurs there. Evan Grenus, now a professional, won the 2015 Amateur at Black Hall.

For the 74th Senior Amateur the par-70 course will play to about 6400 yards, about the length of Shorehaven last year. Three of the course’s par 4s measure more than 400 yards and two others come within a few yards of it. Most of the shorter par 4s play uphill or around doglegs to elevated greens. In short, Black Hall is not short.

“The course plays longer than its yardage for sure,” agrees Hermanson, a 2012 Connecticut Golf Hall of Fame inductee. “You’ve got a lot of uphill holes, some that don’t even look uphill. Nos. 1, 3, 4, 5, 6, 8, 9….they just go on and on. And you have a lot of doglegs. Distance control with approach shots is critical.”

Though decidedly a favorite, Hermanson, who could have easily won last year at Shorehaven but for a balky putter, doesn’t make a big deal of any “home field” advantage. “You can argue pro and con about that,” he says. “But on balance, having the choice between playing somewhere else or here, I’ll take Black Hall.”

The favorite faces a formidable field.

—Dave Szewczul, of Tunxis Plantation Country Club, who this month won the New England Super Senior Championship in Maine, and is a three-time Senior Am champion, the last in 2016

—2007 Champion Richard Stevens of the Eclub of Connecticut

In addition to Senior Amateur winners, other recent CSGA champions include:

—Eric Litke of Keney Park, who won Siderowf (senior) Division of the 2019 Tournament of Champions at Bull’s Bridge early in September.

—Tom Yellin of the Stanwich Club has qualified for several USGA championships, including the 2014 U.S. Senior Amateur. He is a past U.S. Amateur quarterfinalist.

—Paul Fitzsimmons of Brooklawn Country Club won the senior division of the MGA’s Richardson Memorial in May.

—Mike Fitzpatrick of H. Smith Richardson, who lost in a playoff at last year’s TOC.

—Mike Hooper, also of Brooklawn, was a finalist in the Senior Match Play in 2018 and a contender at the Senior Amateur last year as well.

—Jim Romaniello of Shorehaven Golf Club, the 2017 Westchester Golf Association Player of the Year, placed second at Bull’s Bridge in the Tournament of Champions.

—Bob Murphy of Brownson Country Club, medalist in the Senior Match Play for the past two years and a semi-finalist this year, was third at Bull’s Bridge in the TOC.

—Rick Malafronte of Indian Hill Country Club was a quarterfinalist in the last two Senior Match Play Championships. He finished T4, along with Szewczul, in this month’s 2019 New England Senior Amateur Championship.

—Derek Waddington, Jeff Dolin and and Randy Rizy, all of whom, along with Hermanson and Szewczul, made the cut at Shuttle Meadow in the Mid-Amateur.

A great track. A Hall of Fame favorite. A very strong field. The 2019 Connecticut Senior Amateur promises to be quite a show.