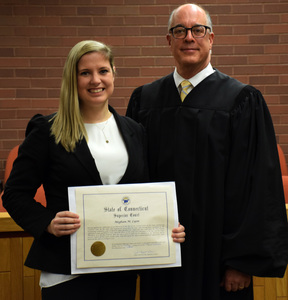 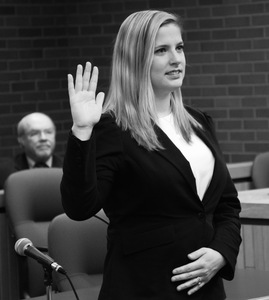 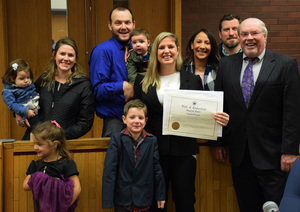 Today, Meghan M. Lyon of New Milford was officially sworn in as a lawyer licensed to practice law in the State of Connecticut.

Lyon grew up in New Milford and graduated from New Milford High School in 2008 (as Meghan Johnson). She went on to receive her undergraduate degree from Yale University while playing shortstop for their Division 1 softball team where she earned All-Ivy League recognition and was named an NFCA All-American Scholar-Athlete in 2012.

Lyon went on to receive her law degree as well as her Certificate of Human Rights from UConn Law – all while attending evening classes and working full time at Hoekenga & Machado, LLC law firm. While she worked during the day and attended law school classes in the evenings, she also was a devoted wife and mother to three children (ages 5, 3 and 6 months), two of whom she was pregnant with during law school. Lyon will continue to work with Hoekenga & Machado, LLC – who have offices in New Milford and Danbury- focusing on Civil Litigation, Employment Law, Workers’ Compensation and Civil Rights.

“Having lived in New Milford my entire life, one of my professional goals was to find a way to give back to my community and Connecticut at large. I couldn’t be more honored and humbled to be able to represent the very same people within my community who helped mold me into who I am today. I fought hard to get here, with hundreds of late nights and thousands of cups of coffee, but I could not have done it without such a strong and unwavering support system. My family was such a source of motivation for me and I just hope I can make them proud. I am lucky to work in a place where I live and live in a place that I love. I am thrilled to see what adventures and experiences lie ahead.”

In addition to today’s ceremony, Lyon’s other professional recognitions include:

Lyon is a hometown girl dedicated to helping defend the rights of those within her own community. She continues to reside in New Milford with her husband, Mark, and three children.