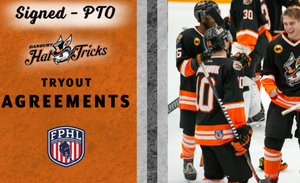 All three players have previous experience in the Federal Prospects Hockey League. Busch-Anderson has played 53 career FPHL games (and 14 more FHL games), including two for the Hat Tricks in the 2019-20 season. Susi played 36 games for Battle Creek in 2019-20, while Whiteduck skated in one game for Mentor in the same season.

Busch-Anderson is a left-shot defenseman with a big frame, standing at 6’4” and 205 pounds. The 28-year-old from Marquette, Michigan turned pro in 2017, starting his professional career in the Federal Hockey League. In 2017-18, Busch-Anderson played 14 games in the FHL, split between Watertown and North Shore.

Busch-Anderson played the majority of his two FPHL seasons in Battle Creek, skating in 40 games and registering four goals and six assists. He assisted on one goal in his two games with the Hat Tricks.

“Buschy has an understanding of what our expectations are here in Danbury,” said General Manager Billy McCreary. “He really applied himself through the pandemic and has enhanced some areas in his game that will continue to make him a valuable member of our defensive corps.”

Susi is a 27-year-old right-handed defenseman, standing at 5’7” and 146 pounds. Susi played in Battle Creek in 2019-20, scoring twice and assisting on seven goals over 36 games.

He spent 2016-18 as an assistant coach for the Rochester Ice Hawks of the NA3HL before returning to the ice himself for the 2019-20 FPHL season.

“Vinnie is a player that brings energy and tenacity to our group, two qualities that certainly don’t go unnoticed here in Danbury,” said McCreary.

Whiteduck is the youngest of the three players at 22 years old. The forward is 6’1” and 185 pounds. Whiteduck scored a goal in the lone game of his professional career for Mentor in 2019-20. McCreary is a fan of Whiteduck’s playing style and is confident he will be a productive player in Danbury. “Kodiak is a hard-nosed player who likes to get to the gritty areas,” said McCreary. “He has the ability to be a consistent threat offensively, while also continuing to make us a hard team to play against.”

Adult tickets are just $15, with children under 12 and military veterans priced at $11. Purchase your tickets to the season opener HERE.

For more information or any questions about the Danbury Hat Tricks, contact Josh Starr at This email address is being protected from spambots. You need JavaScript enabled to view it. .