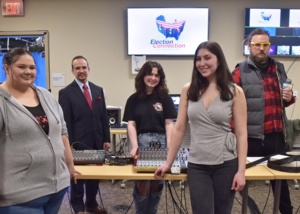 The award is in the Radio Newscast category for “Election Connection’s” November 2021 live election coverage. This year, the BEA Festival received 1,450 submissions from colleges and universities across the U.S. and abroad in multiple categories. This is “Election Connection’s” third top award from BEA, having taken first place in 2015 and second place in 2016 in the Television Studio category.

Every year since its debut in November 2011, “Election Connection” has provided election night coverage of news and results from national, state and local contests, with an anchor team of student, faculty and expert commentators supported by student reporters covering key races and voter concerns. The live news broadcast airs 8 p.m. to midnight and is streamed over the “WCSU Election Connection” YouTube channel, as well as simulcast on the campus radio station WXCI-FM 91.7. “Election Connection” also has won recognition with several awards from the National Academy of Television Arts & Sciences/New England Student Production Awards including first place in the General Assignment – Serious News category in 2020.

Executive Producer Dr. JC Barone, WCSU professor of Communication and Media Arts, said that students participating in the course that produces ‘Election Connection’ often stay late after class and work weekends because they are driven by a commitment to the program. Barone said, “The past two years were particularly demanding and a test to our spirit and ability. This kind of interdisciplinary collaboration shows what we can do, regardless of what challenges face us.”

The “Election Connection” team members will travel to Las Vegas, Nevada, to receive their award in April.