Martha’s Vineyard Escapes Thanks To The Long Ball 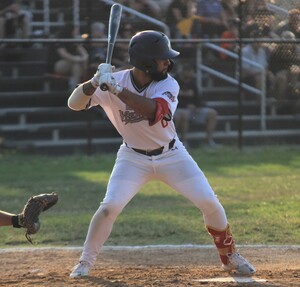 Shark’s catcher Thomas Bramley cracked a game-winning solo home run in the top of the ninth to complete a 4-3 victory over the Westerners.

Martha’s Vineyard (12-8) has won eight of their last ten, and Danbury (9-11) dropped their second game in a row since taking down the Vermont Mountaineers.

Sharks’ center fielder Matt Woods went 2-5 with a game-tying solo shot in the seventh, and catcher Thomas Bramley went 2-4 with the clutch home run in the ninth.

Including Woods and Bramley, the Martha’s Vineyard lineup had five players record multi-hit games on Thursday night. Sharks’ second baseman Dorian Gonzalez went 2-5 with a run scored while Michael Snyder and Henry Wallen each had two hits and an RBI.

Westerners’ left fielder Harrison Feinberg went 1-2 with a walk and 2 RBIs, and designated hitter Korey Morton had a 2-4 night at the plate with two singles. Danniel Rivera also worked three walks from the bottom of the order and scored two runs for his ballclub.

Through the first few innings, it was a back-and-forth affair between the two ballclubs. Martha’s Vineyard struck first in the second with an RBI single from shortstop Henry Wallen. Sharks’ right fielder Harrison Brown lined a ball deep in the right-center gap, but it popped out of the right fielder’s glove, allowing him to hustle into second. After the umpires gathered to discuss the play, they confirmed that the ball was dropped, which allowed Harrison to reach second safely with two outs. Wallen seized this opportunity by yanking a single through the right side to plate Harrison and give the Sharks the early 1-0 lead.

In the bottom half of the inning, Danbury answered by scoring a run on a wild pitch. With a runner on first and one away, Westerners’ third baseman Mike Becchetti hooked a double down the left-field line to put two runners in scoring position. One pitch later, Westerners’ catcher Nick Romano scampered home on a wild pitch to even things up at 1.

Martha’s Vineyard snatched the lead right back in the third with an RBI single from third baseman Michael Snyder, but Harrison Feinberg put the team on his back and gave them a 3-2 advantage. In the bottom of the third, Feinberg scorched an RBI single up the middle to plate Danniel Rivera, and he launched a sacrifice fly in the fifth to give his ballclub the lead.

Danbury kept their opponent off the scoreboard in the sixth, but in the late innings, the Sharks’ bats used the short dimensions in right field to their advantage. Matt Woods crushed a solo home run in the seventh to tie the game at 3, and Thomas Bramley tattooed a solo shot over the right-field wall in the ninth to make it a 4-3 ballgame. These were the last two hits for the Sharks’ lineup, but they would prove to be the difference in Thursday’s contest.

Although the Westerners did not end the night in the win column, they were about ten feet away from pulling off a miraculous come-from-behind victory. With a runner on first and one down, Danniel Rivera launched a ball deep fly ball into left-center field. The ball had insane airtime and continued carrying back toward the wall, but it eventually found the left-fielder’s leather as he crashed into the fence. Sharks’ relief pitcher Camron Hill retired the last batter via the strikeout and gifted his team a season sweep of Danbury.

Camron Hill (3-0) threw two scoreless innings and finished the night in the win column, and Westerners’ relief pitcher Vincent Bianchi (0-1) suffered the loss after surrendering the ninth-inning bomb. Hill fanned four and only walked one batter in his appearance.

Sharks’ starter Case Matter struck out the side in the first, but he struggled through the next couple of innings due to the Westerners’ discipline at the plate. Matter’s final line was two runs (one earned), three hits, two walks, and five strikeouts.

The next stop for the Westerners will be Alumni Field when they battle the Keene Swamp Bats on Friday night. Earlier in the season, Danbury’s bats came alive and defeated Keene 8-5 at Rogers Park, so they will look to get back on track by sweeping the season series. Billy Oldham will make his first start as a Westerner, and the first pitch will be thrown at 6:30 pm ET.