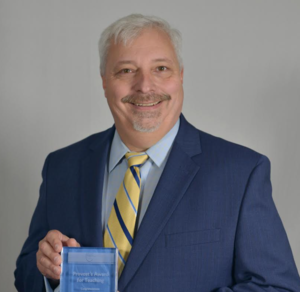 Western Connecticut State University announced that Assistant Professor of Music Dr. Matthew Doiron has been chosen to receive the 2022 Provost’s Award for Teaching.

Doiron is coordinator of the university’s music education program and conducts the Symphonic Band in WCSU’s Department of Music. His research and teaching interests include composition, improvisation and motivation. Doiron’s writings have been published by Oxford University Press and he has presented research and best-practice sessions at regional, national and international conferences throughout the United States and Europe.

“Dr. Doiron brings such enthusiasm to his teaching and his participation in the life of the university that he was an obvious choice for this year’s Provost Award for Teaching,” said Provost and Vice President of Academic Affairs Dr. Missy Alexander. “All of the Provost Award winners present remarks at the opening meeting for the fall semester, helping set the tone for the year ahead and reminding all of us of just how rewarding teaching can be,” she added.

Doiron, of New Milford, began teaching at WCSU in 2017 and is grateful to receive the Provost’s Award for Teaching. “It is an overwhelming honor to be selected for this award. I work with outstanding teachers who inspire me to continue to grow and explore new ways to help students become better musicians, and better teachers,” Doiron said. He often tells his students that he loves his job because “I work with the best students on campus.” He said he then tells them it isn’t a compliment, it’s an expectation of his. “I love working with them because I see them as more excited and better prepared than I was at their age and that gives me lots of hope for the future of the profession.

“Western Connecticut State University has its roots in teacher preparation. The proximity to New York City allows access to one of the richest musical centers in the world. The network of music educators who earned degrees at WCSU spreads throughout Connecticut and beyond. It’s an honor to be working in a university music department that has had so much impact,” Doiron noted.

Dr. Greg Haynes, associate professor of Music and Doiron’s colleague at WCSU, nominated Doiron for the award. “Dr. Doiron is an exceptional teacher, mentor and colleague who demonstrates selfless dedication to the success of his students every day. He is in the business of mentoring student teachers and developing them into successful youth leaders, constantly supervising their work in the classroom and offering incisive commentary. He leads with a gentle hand and empowers students to acquire confidence in the classroom authentically. Nearly 100% of his graduates in music education are placed into full-time jobs immediately upon receipt of their degrees,” Haynes said in his nomination letter.

Additionally, Doiron’s ensembles have earned numerous distinctions including a USSBA New England regional marching championship, selection to the 2009 Presidential Inaugural Parade and a performance at Lincoln Center’s Alice Tully Hall. Doiron has guest conducted bands, choruses and orchestras throughout the northeast including two performances with the Air Force Band of Liberty. He holds a Bachelor of Music degree from Keene State College, a Master of Arts from Southern Oregon University and a Ph.D. in Music Education from the University of Rochester’s Eastman School of Music. Prior to his work at WCSU, Doiron was director of bands at Sanford High School in Sanford, Maine, for 21 years

For more information, contact WCSU Public Relations at This email address is being protected from spambots. You need JavaScript enabled to view it.