Danbury Hat Tricks Victorious Weekend on the Ice, in the Locker Room, and at the Bar 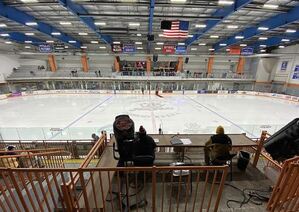 Editor's note: shout out to the great folks at i95 and in particular the writer of this story, Lou Milano for sharing his Danbury Hat Tricks experience (it IS an extraordinary experience) with HamletHub. The Tricks had a victorious weekend indeed, both on and off the ice. The weekend kicked off on Friday with Danbury Mayor Joe Cavo dropping the ceremonial puck. Read all about it below.

This season is underway at the Danbury Ice Arena and it began in victorious fashion. I was in the Arena for Friday and Saturday's games and I experienced the entire thing for you. Once you are done checking this out, you are going to buy tickets, that is not a threat, it's just what is going to happen.
There is something for everyone inside that arena, even if you don't like hockey. There were a ton of activities to be a part of in the Arena, even if you don't like hockey. That's not my style, if I go for a game I want to watch it but all the extras don't hurt the experience one bit,

The Hat Tricks had back-to-back games against the Port Huron Prowlers to kick off the season.

The Galente's Were in the Locker Room

Former owner of the Danbury Trashers Jimmy Galante and his son AJ (Former Trashers President) were in the building. They were invited by the Hat Tricks owners the Diamond Brothers to step into the locker room and get the team hyped up before Friday's game. Since I was there, I can tell you that it worked. See the speech from the Galantes in the video at the bottom of the page.

Not a Bad Seat in the House, I Know

This is the view from my seat in Section 103, I have season tickets and I'm hyped about it. What else am I going to do in the cold winter months? The answer is nothing, this is where I will be.

I Sat With Ron & the Renegades but One Day Section 102

Once I realized my pal Ron was in the building, I made it over to his section in the 200's for a bit. I wanted to get a feel of surrounding myself with real hockey fans and take part in heckling the opposition. I look at this as a way to prepare myself to step up and sit with the real whack jobs in Section 102. 102 has a reputation, that lives well beyond the boundaries of Danbury they are known throughout the hockey world nationwide. This section became infamous for their verbal abuse of the visiting team during the Trashers era and they have not stopped scaring opposing players since.

They Won on Friday

They Won on Saturday


There is a Ton to Look at

Away from the Ice there is no shortage of things to look at like this Danbury Hat Tricks motorcycle. There are more bikes that line the hallway upstairs, a few that were made at the world-famous Orange County Choppers. Downstairs there is a snack bar, a place to grab a beer, an arcade and when I went on Friday they had a live band in the lobby.

Even More to Play With

Then there is the Axe Tricks lounge. I'd heard the Ice Arena had done some sick renovations but I didn't know what a job they did upstairs until I walked in. It's already one of the best bars in Danbury but probably the only bar with axe throwing stations.

I was particularly excited that I could buy a real drink and not have to drink beer. There was wine or any other booze drink you want. They have foosball and billiards, so you can fill an entire evening at the arena and not even watch the game. That is not my style, I'm there for the hockey but I know there are people who need a 15 ring circus to keep them entertained and obviously so do the folks with the Danbury Hat Tricks.

This is not a commercial, I'm just that pumped up. I've been looking for something to do on a Friday or Saturday in Danbury when we don't already have plans and now I have it. You can catch me down at the Arena watching our Hat Tricks smashing faces and bossing the ice.

Now I just have to learn the game and the players better. I didn't grow up following hockey like I did with football, baseball or basketball. We certainly didn't play hockey around here, there was nowhere to do that. I'm a fast learner, I'll be screaming and yelling at the refs soon enough calling penalties for them.

Here' just a smash cut of the action I captured Friday. If you have the speakers up, you'll probably hear some heavy swearing, that was Ron and I. If anyone is screaming about shaving something, that is definitely me.

P.S. Did you think I meant the players had a successful weekend at the bar? No, me, I meant me.
Follow Lou Milano on Instagram @loumilano79
*Image courtesy Lou Milano
Read More: Danbury Hat Tricks Victorious Weekend on the Ice and view additional photos.