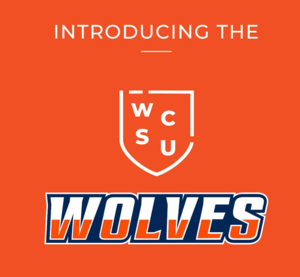 After a multi-year discussion that included town halls and online balloting, Western Connecticut State University announced today that a new mascot has been selected to represent the university.

WCSU, founded in 1903 as the Danbury Normal School, has undergone several name changes and logo variations in its 119-year history; now a new mascot identity will complete its transformation from a 20th century teachers’ college to a 21st century regional state university.

A committee co-chaired by Student Government (SGA) President Patrick Moody, a Digital & Interactive Marketing major from Bethlehem, and Associate Vice President for Enrollment Services Jay Murray solicited input from a wide swath of the university’s constituents leading up to the final announcement.

According to Moody, “In June 2019, WCSU President John Clark tasked a committee to select and adopt a new mascot identity. The Mascot Advisory Committee was created and began working toward a final ballot to the community where a new mascot identity would be chosen. The most recent roster of the committee consisted of four students and six staff/administration.

“The five mascot options on the final ballot were derived from submissions from the community in town halls and previous ballots that have taken place in the past two years,” Moody continued. “The committee then consulted with Connecticut Board of Regents (BOR) legal staff, a representative of the Mohegan Tribe in Eastern Connecticut, and an educator from the Institute for American Indian Studies to consider the cultural and legal implications of the five identities.”

For more information, contact the Office of Public Relations at This email address is being protected from spambots. You need JavaScript enabled to view it. .