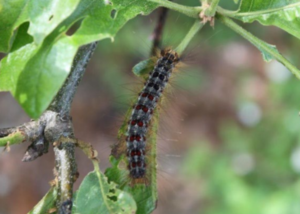 *NOTE: Recent Name Change from Gypsy Moth to Spongy Moth per the Entomological Society of America (explanation & link below)

“2021 was the first year of widespread defoliation in northwest Connecticut and most healthy trees refoliated in part due to sufficient summer rains. The energy required to refoliate places significant stress on trees increasing the risk of tree mortality in 2022,” said DEEP Director of Forestry Chris Martin.

Wet spring conditions should activate a naturally occurring soil borne fungus, Entomophaga maimaiga, which is lethal to only spongy moth caterpillars and normally keeps their populations in check. Connecticut has experienced similar cyclical outbreaks, most recently in eastern Connecticut that resulted in widespread tree mortality after several dry springs and corresponding consecutive years of defoliation. Wet spring weather eventually returned favoring growth and effectiveness of the Entomophaga maimaiga fungus and ending the infestation.

Annual forest pest and disease aerial surveys conducted by CAES documented spongy moth caterpillars defoliated 156,000 acres in 2020 (mostly in the eastern half of CT) and 45,548 acres in (mostly in Litchfield County) in 2021.

“While most trees will refoliate initially, repeated attacks from spongy moths can weaken a tree’s natural ability to ward off secondary stressors such as drought or other insects and disease. Oaks are most preferred tree species,” continued Martin. “Under heavy infestation spongy moths will eat just about everything with green leaves and even needles. Some people may remember that nearly 1.5 million acres were defoliated by the spongy moth in 1981, and while we lost trees, our forests recovered.”

Spongy moth infestations are difficult to control over wide areas and while the State has no plans for widespread aerial spraying, individuals interested in pursuing treatments should hire a certified arborist or licensed pesticide applicator to protect their trees in a safe and effective manner.

'Spongy Moth' Adopted as New Common Name for Lymantria dispar | Entomological Society of America (entsoc.org). The previous name, "gypsy moth," was removed due to its use of a derogatory term for the Romani people. The change is the first undertaken by ESA's Better Common Names Project.

A comprehensive overview of the spongy moth in Connecticut.

Track the outbreaks of spongy moths in Connecticut.

What you need to know about the spongy moth, including advise on managing their population in your woodlot.