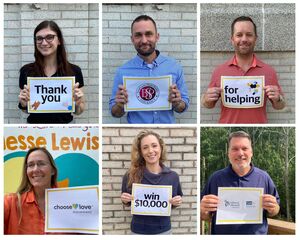 Bongiovanni, Sloan & Paradiso Insurance originally received a $5,000 for Jesse Lewis Choose Love Movement through a submission process, and Liberty Mutual® and Safeco Insurance® offered Leah Broadwell at Bongiovanni, Sloan & Paradiso Insurance an additional chance to raise even more funds through social media support via the official Make More Happen microsite www.AgentGiving.com. Together, they were able to raise an additional $5,000 by having their story shared at least 500 times over the course of a week to total the donation to $10,000.

Throughout 2020, Liberty Mutual® and Safeco Insurance® will select a total of 34 independent agents nationwide will be selected for a Make More Happen Awards™ and Liberty Mutual® and Safeco Insurance® will donate up to $340,000 to the nonprofits they support. Agencies became eligible for the award by submitting an application demonstrating their commitment to a specific nonprofit, along with a photo of a project they worked on.