The Greatest Love of All, a tribute to Whitney Houston comes to The Ridgefield Playhouse, March 4

Details
Published on Thursday, 30 January 2020 18:11
Written by The Ridgefield Playhouse 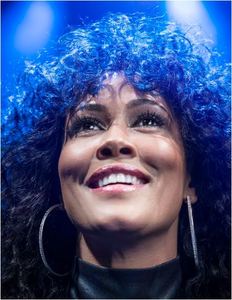 Whitney Houston’s musical legacy is brought to life in an acclaimed tribute show described as “...mind-blowingly spot on.” The Greatest Love of  is a Whitney Houston tribute starring Belinda Davids – a chart-topping artist in her home country of South Africa – who has performed alongside the likes of Keri Hilson, Keyshia Cole and Monica and been featured on Fox TV’s “Showtime at the Apollo” and BBC1 TV’s “Even Better Than the Real Thing.”

With the accompaniment of a live band, backing vocalists and choreographed dancers, plus state-of-the-art sound, lighting, and theatrical effects, this is a beautifully crafted Las Vegas worthy tribute to one of the world’s most revered singers. The two-hour production takes you on a heartfelt journey through Houston’s greatest hits - including “I Will Always Love You,” “I Wanna Dance With Somebody,” “How Will I Know,”  “One Moment in Time,” “I Have Nothing,” “Run to You,” “Didn’t We Almost Have It All,” “Greatest Love of All,” “I’m Every Woman,” “Queen of the Night,” “Exhale (Shoop Shoop),” “Million Dollar Bill” and more!  The Greatest Love of All comes to The Ridgefield Playhouse Wednesday, March 4th at 8pm, part of Pepsi Rock Series powered by Xfinity.

For accomplished South African songstress Belinda Davids, starring in The Greatest Love of All  is the culmination of a life-long connection with the superstar to whom she pays homage.  Davids beat almost 15,000 other hopefuls to take on the role and it was her own eternal love of Whitney that prepared her for the show. Exposed mainly to R&B and gospel as a child, Davids was innately drawn to Houston’s musical style. Singing professionally from her early teens, Houston songs became a fixture in Davids’ live shows. “I think I’ve sung at least one Whitney track in almost every live show I’ve ever performed,” says Davids.

Though she eventually carved out a successful career as a chart-topping solo artist and a session vocalist for artists such as The Temptations, Keri Hilson, Keyshia Cole, Monica and Johnny Gill, in her earlier days Davids encountered resistance from many industry professionals who were unsure how to work with her because she looked and sounded so exactly like Houston.

The ultimate realization of Davids’ affinity with Whitney occurred during a show in Hong Kong. Following a rendition of “I Will Always Love You,” the audience was so astounded by her performance that they demanded she sing acapella to prove she wasn’t lip-syncing to a Whitney track. Now representing her idol on stage, Davids feels destined: “I’ve essentially prepared my whole life for this show and I feel privileged to be able to honor Whitney in such a way.”

After six years touring almost exclusively with The Greatest Love of All Davids has built it into an international hit. In addition to her TV appearances, Belinda’s career highlights include working with the National Philharmonic Concert Orchestra, performing at London’s iconic Hammersmith Apollo Theatre and gaining impressive online views of some of her performance videos (over 12 million and counting).

For tickets ($57.50) call or visit the box office, 203-438-5795 or go online at ridgefieldplayhouse.org.  The Ridgefield Playhouse is a non-profit performing arts center located at 80 East Ridge, parallel to Main Street, Ridgefield, CT.